Alzheimer’s disease and other neurodegenerative conditions are characterized by the toxic action of protein oligomers in the central nervous system. In the case of Alzheimer’s disease, this leads to the disruption of synapses and eventual synapse loss and neuronal death. 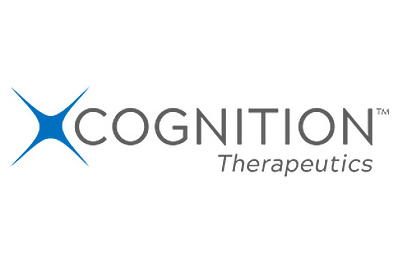 The lead indication for CT1812 is Alzheimer’s disease, which affects an estimated 6 million Americans. Caring for this population costs more than $200 billion annually. Alzheimer’s disease has an enormous public health impact that will only increase in patient numbers and health care burden unless progress is made on finding effective treatment and prevention strategies.

Cognition is the first company focused solely on stopping the synaptic binding and signaling of soluble Aβ oligomers through the use of small molecule receptor antagonists such as CT1812. Unlike previous attempts to address Aβ, CT1812 does not target or directly interact with any form of the protein or its precursors. Rather, CT1812 binds to the sigma-2 receptor complex, a key regulator of the oligomer binding site. CT1812’s interaction with sigma-2 results in the displacement of Aβ oligomers from their receptor targets on the synapse.

Proceeds from a Series C financing and additional potential NIA grants are expected to support ongoing and planned clinical development and chemistry, manufacturing, and control activities for CT1812 in Alzheimer’s disease and potentially the preclinical and early clinical development of a pipeline candidate for the treatment of dementia with Lewy bodies.

The company is seeking copyright protection for all source code that underpins the software platform. Cognition’s lead candidate, CT1812, is covered by composition-of-matter patents worldwide. Other sigma-2-targeted compounds are in the company’s pipeline.

CT1812 was found to be safe and well tolerated in a double-blind, placebo-controlled Phase 1b/2 study in 19 patients with mild to moderate Alzheimer’s disease. In this study, treatment with CT1812 was also associated with positive changes in synaptic proteins that are considered important for normal synaptic function. Based on these results, Cognition commenced several Phase 2 studies to enhance its understanding of CT1812’s impact on these and other synaptic protein biomarkers, its degree of target engagement, and on synapse function (as measured by qEEG). Findings from this Phase 2 program will inform a proof-of-concept study powered to measure changes in cognitive function.

Neurodegenerative disorders such as Alzheimer’s disease represent extremely large markets. At the appropriate time, Cognition will look to enter into a partnership, licensing agreement, or other business transaction with a pharmaceutical company that has the resources necessary to reach these markets.