It started with a conversation… 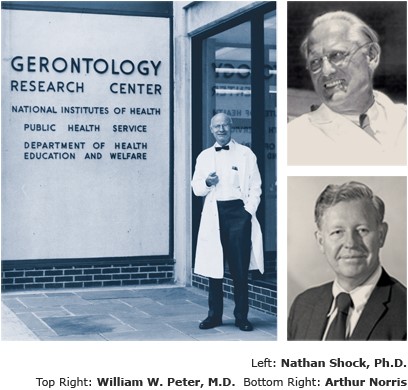 For the most comprehensive and longest running longitudinal examination of human aging in the world, NIA's Baltimore Longitudinal Study of Aging (BLSA) had a simple beginning.

It started with a conversation in 1958 between Nathan Shock, Ph.D., Chief of the Gerontology Branch at the National Institutes of Health (NIH), and William W. Peter, M.D., a retired U.S. Public Health Service officer and missionary doctor. Peter had a long-established reputation for his dedication to medicine and wanted to know how he could make a final contribution—donating his body to science. But Shock had something else in mind. He wanted to discuss with Peter the direction he believed aging research should take.

Breaking with scientific convention, Shock wanted to study normal aging, and he wanted to do it by repeatedly evaluating the same people over time. He hypothesized that important concepts pertinent to aging could only be understood by looking at healthy, independently living people at regular intervals over a number of years. Shock didn't just want bodies donated to study aging after death; he wanted living people participating in scientific studies.

It was a radical concept that intrigued Peter. He volunteered to be the first participant.

Soon, Shock and Peter were joined by study coordinator Arthur Norris, described by Shock as his "steady right hand." The three men outlined the new study's parameters. The BLSA would "observe and document the physical, mental, and emotional effects of the aging process in healthy, active people."

Women were not originally part of the study design but joined the BLSA in 1978, offering scientists the opportunity to better understand the influence of sex on aging, especially important because at the time, women lived 8 to 9 years longer than men. Many of the original female participants were wives or widows of male volunteers.

Today, NIA's Intramural Research Program in Baltimore welcomes more than 1,300 male and female BLSA participants ranging in age from their twenties to 100s, who come regularly for a variety of tests to help scientists observe changes over years of life.

The Baltimore Longitudinal Study of Aging (BLSA) has been active since 1958. It is one of the longest ongoing longitudinal studies of aging in the world.

The goal of the study is to answer the big question: "What is aging?"

The scope of this question has evolved over the years. At its birth, the BLSA focused on the physical and cognitive changes associated with normal aging, free of disease. The study later began to address the interrelationship between disease and age-related changes, looking at their combined effect on physical and cognitive function. Today, the question also extends to exceptional aging, targeting rare individuals who go through most of their life, well into their eighties and beyond, with no health problems.

The BLSA continues to pursue the following objectives:

The BLSA works toward meeting its goal and objectives with the help of its amazing and dedicated participants. Participants come to the BLSA every 1 to 4 years, depending on their age, and receive comprehensive health, cognitive, and functional evaluations that take nearly 3 days to complete.

Since its inception in 1958, over 3,200 BLSA participants have contributed important data on the aging process. Currently, over 1,300 individuals are actively followed in the BLSA.

Participating in the BLSA is a life-long commitment. In fact, a handful of BLSA’s dedicated participants have been in the study for over 50 years. One participant has even made 42 visits to the BLSA testing facility!

1940 – The Macy Foundation provides a one-year grant to establish a Gerontology Unit—a unique partnership between the National Institutes of Health, which provided research staff support, and the City of Baltimore, which provided lab space and access to patients—at the Baltimore City Hospital located on a 130-acre site in East Baltimore.

1941 – In July, the Macy Foundation grant expires, and the National Institutes of Health assumes full financial support. Dr. Nathan W. Shock, Assistant Professor of Physiology at the University of California Medical School, is appointed Chief of the Gerontology Unit.

1962 – Congress appropriates $1 million to plan a modern facility to conduct research on aging. The City of Baltimore transfers 4.945 acres to the Federal Government "exclusively for purposes of scientific research and other related activities in the field of Gerontology."

1965 – The Gerontology Branch under the National Heart Institute is transferred to the National Institute of Child Health and Human Development (NICHD) and remains in Baltimore.

1968 – Official dedication of the $7.5 million, four-story Gerontology Research Center building located and operated in cooperation with the Baltimore City Hospital.

1974 – Public Law 93-296 authorizes the establishment of the National Institute on Aging (NIA).

1975 – The GRC and the Adult Development and Aging Branch separate from NICHD to become the core of the NIA.

1978 – Women included as participants in the BLSA for the first time.

1984 – The City of Baltimore transfers to Johns Hopkins about 125 acres from the former Baltimore City Hospital campus surrounding the GRC to create the Francis Scott Key Medical Center (FSKMC).

1984 – "Normal Human Aging," an overview of the first 20 years of research findings about the natural course of human aging, is published; NIH Publication No. 84-2450.

1991 – Dr. T. Franklin Williams retires and returns to the University of Rochester School of Medicine and Dentistry.