The Interventions Testing Program (ITP) tests potential agents that may delay aging as measured by lifespan extension and/or delayed onset/severity of late life pathologies. The ITP is funded by four NIA cooperative agreement grants — three U01s to the Jackson Laboratory, the University of Michigan, and the University of Texas Health Science Center at San Antonio to support testing; and one U24 to the Jackson Laboratory to support a Data Coordinating Center (DCC). The three testing sites work closely together with NIA to design and execute standard operating procedures (SOPs) that provide a consistent experimental protocol adhered to across the program. Each site also brings specialized expertise to the project, including statistical analysis, pharmacology, toxicology, optimal diet compounding, and non-harmful tests of age-sensitive physiological function. The DCC provides a public-access archive of experimental outcomes and SOPs.

Proposals for agents are solicited from the research community and undergo a two-tiered review process before entering the testing pipeline: 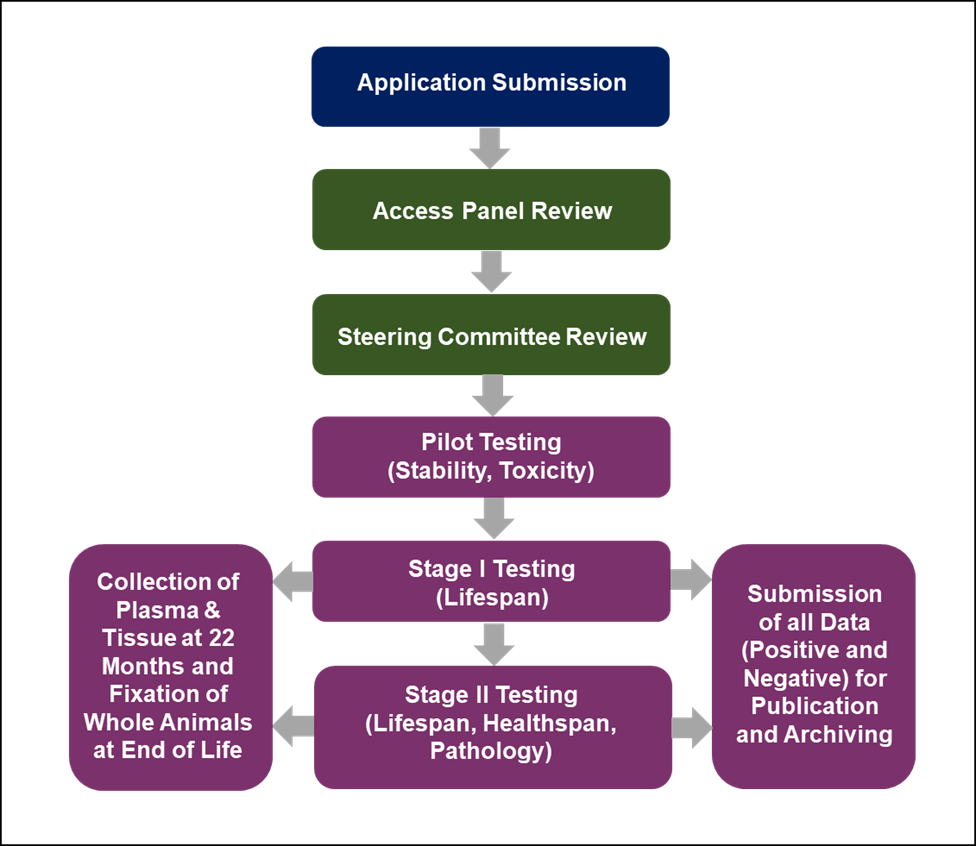 Please see below for details on each step of the process.

The ITP makes an annual call for proposals to the research community, and proposals are accepted from all scientific quarters, including U.S. and foreign universities, commercial entities, and even individuals without institutional affiliations. All applications proposing an intervention for testing by the ITP are first reviewed and scored by the Access Panel and then prioritized by the Steering Committee. Applications are evaluated for scientific merit, including the potential of the proposed intervention to affect lifespan and diseases of aging, and the feasibility of successfully incorporating the proposed agent into rodent chow, safely administering it to mice continuously for approximately three years, and obtaining it at a reasonable cost. Potential applicants are welcome to discuss their ideas with any of the ITP principal investigators prior to submitting their application (see ITP Homepage for contact information).

Up to six agents are accepted into the ITP each year. All testing is performed simultaneously, under SOPs, at the University of Michigan, Jackson Lab, and the University of Texas Health Science Center at San Antonio to ensure the reproducibility of the results. All test agents are administered in the food to groups of specific pathogen-free male and female mice of the UM-HET3 stock. UM-HET3 mice are the progeny of CByB6F1 females and C3D2F1 males and are genetically heterogeneous, the equivalent of a large sibship.

Stage I tests an agent, usually at a single dose, with treatment usually beginning at 4-6 months of age. Each mouse is observed until its natural death or until it becomes so severely ill that survival for more than an additional week seems very unlikely. The study design includes sufficient numbers of mice to provide 80% power to detect a 10% increase in lifespan for either sex, pooling across sites.

Agents that show promising results in Stage I can advance to Stage II, where additional doses are tested and/or the timing of treatment initiation is altered. In Stage II, the endpoints are also expanded to include measures of health, pathology, and biochemical mechanism, in addition to lifespan.

All lifespan results, both positive and negative, are submitted for publication.

All data from the ITP are publicly available through the ITP Data Coordinating Center following publication.

Data are analyzed and shared with the applicant (“sponsor”) when 50% (mid-point) and 90% (end-point) of mice in the control group have died at all three test sites.

Additionally, plasma and tissue collected at 22 months of age and whole animals fixed at the end of life are made available to all investigators (with priority given to the agent’s sponsor). Contact Dr. Jennifer Fox (jennifer.fox@nih.gov) to request samples.

Role of the Sponsor

In addition to providing the rationale for testing and informing the study design (see Application Instructions), each sponsor will collaborate with the ITP investigators to interpret the data and to serve as a coauthor on all resulting publications.