Amid all the news coming out of Washington these days, you may have heard that, for the first time in decades, a portion of the Federal budget was passed by Congress and signed into law by the President at the beginning of the 2019 fiscal year. This partial budget provides funding for the Department of Health and Human Services, including NIH. Rather than following the pattern of previous years, when final budgets were not in place until halfway through the year, this year we will be able to plan earlier how, when, and where to best invest NIA research dollars.

The total NIH appropriation for FY 2019 is $39 billion; NIA’s portion is $3.08 billion—tripling our total budget since FY 2013 (see graph). This year’s NIA budget includes an increase of $84 million in our general appropriation and an additional $425 million designated for Alzheimer’s and related dementias research. NIA funding for non-Alzheimer’s research has continued to increase at a rate comparable to overall increases in the NIH budget.

We are deeply grateful to the Congress and to the U.S. taxpayers for recognizing and supporting continued biomedical research and in particular, research on aging and Alzheimer’s disease and related dementias. 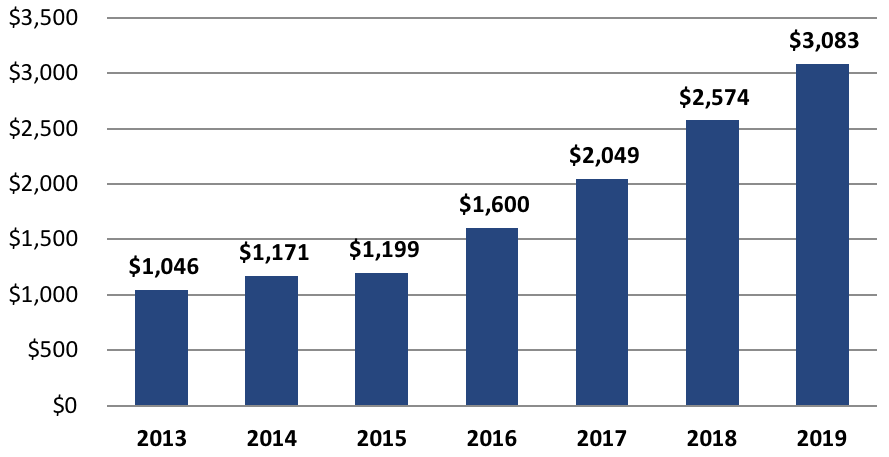 This influx of funds has not only provided us with the ability to dramatically expand our Alzheimer’s and related dementias research portfolio, but also to expand funding lines for aging research projects.

One of the most exciting developments has been our ability to attract new scientists to the field. Between 2015 and 2018, 35 percent of the R01 equivalent awards in Alzheimer’s and related dementias went to investigators who are new to this field. In addition, quite encouragingly, 25 percent of those who received these awards were new or early-stage investigators. As early career investigators, they typically enjoy a 3- to 6-percentile advantage in the pay line. And, importantly, they represent new blood and new minds in the community of researchers focusing on Alzheimer’s and related dementias.

In another effort designed to recruit new researchers and new ideas to Alzheimer’s research, we conducted a pilot experiment in FY 2017. We invited applications for administrative supplements from the National Institute on Biomedical Imaging and Bioengineering, supplements that were relevant to Alzheimer’s and other dementias, but were supplements to grants that were not themselves Alzheimer’s or dementia research. In FY 2018, we expanded the program to include 25 NIH Institutes and Centers which encouraged their grantees to pursue Alzheimer’s and related dementias investigations. In FY 2018, we awarded approximately 300 supplements through this strategy.

We’ve also been able to expand the infrastructure of research resources. We have expanded databases and biobanks and created new sources for Alzheimer’s and related dementias research that can be used by almost anyone involved in these projects. From imaging to genetics to drug development to biospecimens, we have extensive resources for you to explore.

Because we now have our budget allocation at the beginning of the fiscal year, we expect to award more grants earlier than in the past. We have not yet calculated our pay lines for FY 2019 but expect to do so fairly soon. We will continue to have separate funding lines for Alzheimer’s and non-Alzheimer’s projects. As usual, we will start the year conservatively with lower pay lines, but in contrast to past years, these will be based on a known total appropriation. As we move into the winter and spring, we hope to be able to increase these initial funding lines.

On behalf of NIA, I’d again like to express my sincere appreciation to the Congress and taxpayers for the historic, groundbreaking support we’ve received in the last six years. Our deep appreciation also goes out to the Alzheimer’s and aging community for their tireless advocacy, understanding and support toward meeting our goals of enhancing aging research and the national goal to stop Alzheimer’s disease by 2025.

This is certainly good news and we are appreciative of Congress and NIA's efforts to support funding for Alzheimer's disease. My question is can we expect pay lines for 2019 to at least stay where they are currently for fiscal 2018? It is disconcerting and confusing for many researchers who have their grants scored in 2018 but in fact 2018 pay lines are meaningless moving into the new fiscal year. Why can't NIA fund proposals that are scored in a given fiscal year using the concurrent pay lines established during that same year?

Thanks for your comment. I hope we can post our first FY 2019 pay lines within the next month. We have an annual budget process and that means all appropriations for a given year need to be spent in that year. In turn, that means we need to develop new pay lines with each new annual appropriation. Review precedes funding decisions and so some applications that are reviewed late in the prior fiscal year inevitably are considered for funding in the following fiscal year.

What would be more important than a budget increase that favors research on Alzheimer's Disease and other age-related disease is to focus on research on the etiology of biological aging. At least that is the implication when one reads the name of this institute. Other Institutes are better qualified to focus on age related diseases. Why not emphasize research on the cause of aging which is why the milieu of old cells favors the expression of all age associates diseases?

L. Hayflick
Founding Member of the Council of the NIA and Founding chair of its' Executive Committee