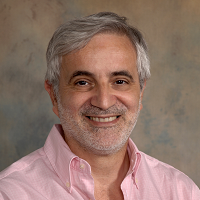 A standing-room-only crowd of extramural and intramural scientists filled a room at the NIH main campus in Bethesda on April 30, when researchers from NIA joined colleagues from the National Cancer Institute (NCI) for a collaborative scientific workshop on cancer in aging. We were excited and gratified by the turnout and by the high level of interest among the participants to tackle the multiple intersections of aging and cancer.

The day represented the culmination of a joint effort of a “dream team”—NCI, NIA, and the Samuel Waxman Cancer Research Foundation—to develop a partnership and funding opportunity in this area. This is the first time that intramural and extramural staff from NIA and another NIH institute have a formal agreement to support a unique research opportunity. Dr. Tom Misteli, director of NCI’s Center for Cancer Research, noted that it took more than a year just to work out the legal issues of the funding opportunity for the partnership.

A combination of epidemiology and basic science

This funding opportunity is particularly timely because of the alignment of two important elements: the epidemiology of cancer and aging, and recent progress in basic science, especially in geroscience.

As cancer treatments have grown more effective, we have more cancer survivors than ever before. And, they’re living longer than previous cancer survivors. In addition, many cancers occur in middle age or later. As NCI Director Dr. Ned Sharpless pointed out in his opening remarks, fighting a “war on cancer” really means a research struggle against basic human biology and aging, since the aging process itself increases the risk of many cancers.

Along with the epidemiology comes a wealth of new research on the relationship between cancer and the aging process itself. We’re beginning to see biological similarities between aging and cancer, particularly in terms of stress response at the cellular level, the role of senescent cells, and the response to genetic and epigenetic changes over time.

Workshop presentations covered many issues related to both cancer and aging. Among them:

The recent funding opportunity provided an opportunity for collaboration between intramural and extramural researchers from NIA and NCI. Extramural researchers could submit applications (developed in conjunction with intramural scientists) for awards of up to $75,000 in direct costs per year for two years. If approved, matching funds in the same amount will be allocated to the NIA or NCI intramural investigators with whom they are collaborating.

We received a number of promising applications in response to this announcement and are looking forward to the review process. The awards are expected to be made next spring. In addition, researchers from both NIA and NCI are working together to develop proposals for joint funding from the intramural programs of the two Institutes.

I want to express my thanks to all of the scientists who participated in the meeting with high-quality presentations and discussions. Particular thanks are due to NCI’s Drs. Sharpless and Misteli and Dr. Felipe Sierra, director of NIA’s Division of Aging Biology, along with their respective staffs. We’re looking forward to additional future collaborations with NCI and other NIH Institutes.

In the meantime, please let us know if you have ideas about this topic by commenting below.

As the cancer immunotherapy has come in first place in oncology, we and others have a new approach to immunotherapy of Alzheimer using omega-3 mediators to support innate immunity clearance of amyloid-beta https://www.ncbi.nlm.nih.gov/pubmed/28634213 . Omega-3 support NK cell function against cancer. Unfortunately, NIA still does not get it and support Alzheimer immunotherapy.