We posted an update to our funding policy on Friday. The sobering news is that for most areas of research within NIA’s mission the payline will be at the 8th percentile, with 5th percentile for applications requesting $500,000 and over, and 12th and 14th percentiles, respectively, for new and early stage investigator R01s. So, though we have raised it a little from our interim payline, this funding line has fallen a lot from where we held it in the four prior years. We expect these paylines to be final for fiscal year 2015, for most applications that are not related to Alzheimer’s disease. The amount of money needed to reach the next percentile is more than what we expect to see come back to us from various sources by the end of this fiscal year. We will have news later on about how we will support research with the small remainder that we expect.

As I mentioned in a prior post, the story is about research grant application numbers and about how well they reviewed in panels at the Center for Scientific Review. As the accompanying figure shows, the total NIA applications given a score by these panels increased modestly, while the number that received top-percentile scores increased dramatically compared to 2014. That is a 49% increase in applications scoring within the 5th percentile in 2015 compared to 2014! Wow! 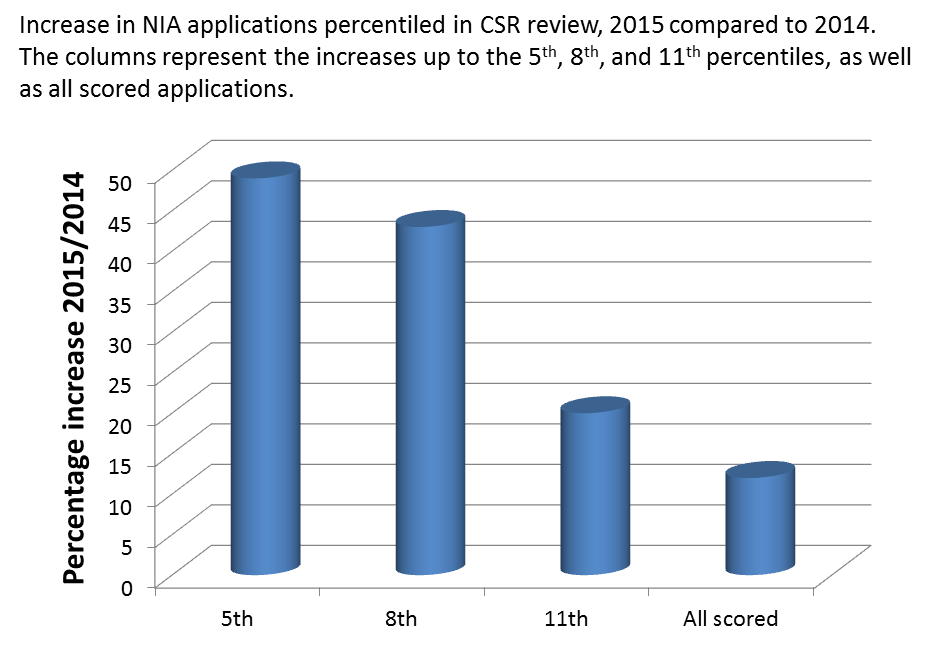 This change is a particular “triumph” for the community of researchers studying aging. Take a bow, please! (Why do I hear two cheers echoing faintly?) Other Institutes at NIH have not experienced the drama of suddenly increased quality that we have seen in 2015.

Why is NIA experiencing this influx of extremely high quality applications?

The most plausible explanation I can construct is that the new resubmission policy acts differentially depending on whether an Institute already had a tight funding line. Even in the previously miserable days of an 11th percentile funding line— ah, what salad days they seem now!—NIA still experienced a tighter funding line than most other NIH Institutes. That means that many of our investigators had very well-scored applications that we could not pay. So, these applications were resubmitted, or appeared as new applications, as the policy now allows. I imagine that reviewers recruited by the Center for Scientific Review, when assigned these applications, were aghast at the thought of reviewing—one more time—science that they thought should have been paid the last time they reviewed it. “I will make sure it is paid this time!” was probably muttered a lot in the most recent seasons of review. And so we had a huge surge in applications scoring at the 5th percentile or better.

The story was very much the same for the smaller group of grant applications that are reviewed by NIA-organized panels. (These are applications for program projects, centers, training grants, and a few others.) The total costs of the number of applications achieving the best possible score—a 10—exceeded the funds we had available to pay them. Then, the scores in the next tier down thinned out, just as they did among the CSR-reviewed research applications. I suspect that reviewers for NIA were hitting that button, too – “I will make sure that it is paid this time!”

We ARE paying them. But our funding strategy for NIA-reviewed applications requires seriously reduced budgets for some and budget gymnastics from others. (For example, we try to smooth across fiscal years budgets that are very different from year to year, as when a clinical trial switches from the planning phase to the field phase.) With these efforts, by the end of the year we do expect to pay all the way through 12. (I know. That is not far!) It makes 13 a very unlucky number.

Applications for research on Alzheimer’s disease

As you may know, funding prospects for Alzheimer’s-related applications are a little brighter. We will have more information on that payline in the near future.

We expect to extend the career award pay line to 18, and we might scrape another point there by the end of the year. But, that is not a promise!