NIH announced a change in resubmission policy in April. Following the policy change, lots of attention focused on the application count. The research community worried that NIH would see a giant surge in applications. Will a large number of additional applications overwhelm the application review process? Will success rates shrink to the grim, low-single-digit numbers not seen since pre-ARRA days? We have to wait to find out, and there are a few sweaty palms round here!

This blog post covers a different feature of the April policy change: how investigators can make decisions about grant applications that are not funded the first time they are submitted for consideration. Sanoj Suneja, a data scientist in my office, contributed to this post.

With the policy change, investigators now have a real choice after an A0 grant application is not funded.

To answer these questions, we dug into how well NIA-assigned A1 applications submitted in 2012 and 2013 did in review and award. We hoped to gain insight that might help inform your decisions.

What do our data say?

The bar chart below shows probabilities of award for A0 and A1 R01 applications assigned to NIA in fiscal years 2012 and 2013. 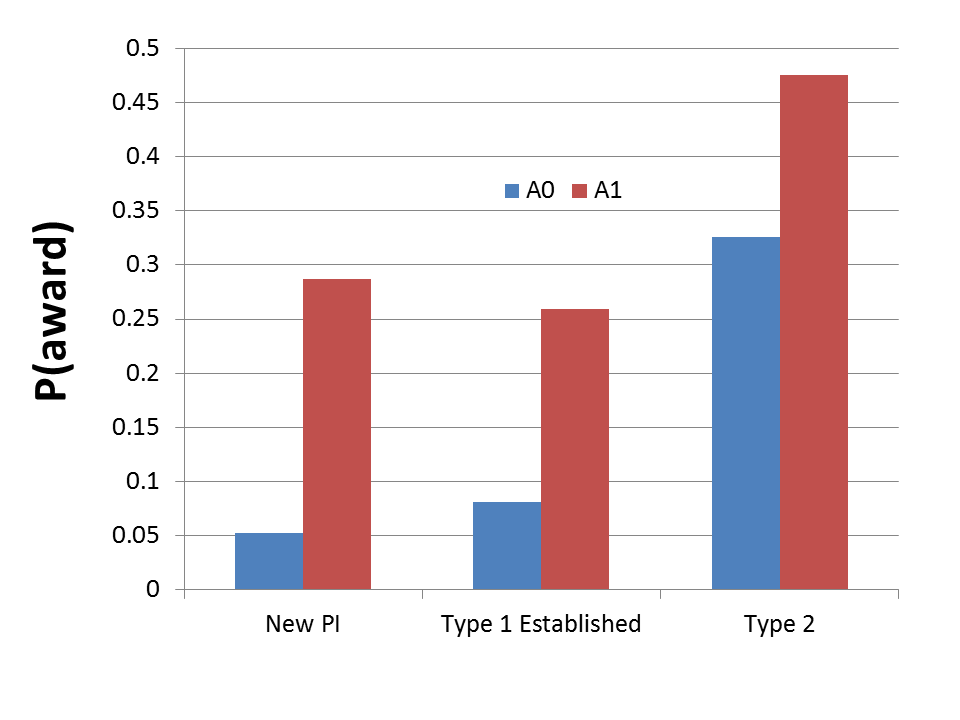 It is no surprise, really, that the only applications to have a decent chance of success on first submission are competing renewals, the Type 2 applications. New applications from both new and established investigators had single digit success rates on initial submission.

New investigators are more likely to get grants when they revise and resubmit unfunded applications.

Is this an artifact of the scoring advantage given to new investigators? It’s not.

Of course, most critical still is reading the summary statement, discussing it with colleagues and with your program officer, and working out whether you can mount a point-by-point answer to the critical comments from the review.

Why do resubmitted grant applications from new investigators do so well?

We have some ideas, and you probably have some thoughts as well. Let us know why you think this is happening by commenting below.

Of course you may have other ideas and we welcome your thoughts on it.