For the past few years, the NIA has been trying to increase the number of R21 grant applications and awards. The R21, of course, is an NIH-wide grant program “intended to encourage exploratory and developmental research projects by providing support for the early and conceptual stages…” See the current funding opportunity announcement.

You might wonder why we are so eager to support these awards. Well, it has to do with countering conservatism in the peer review of new science.

Isn’t the R01 the true standard of a researcher’s independence?

A widely held view is that receipt of an NIH R01 award is like admission to a club. That high-profile, independent funding confers respectability on research and researchers alike. It is the coin of the realm for tenure and promotion committees. Junior researchers aim for one. It allows funding for a major attack on a research area—and stability of employment to a research team!

Why award R21s then, with their comparatively brief term and limited funding? 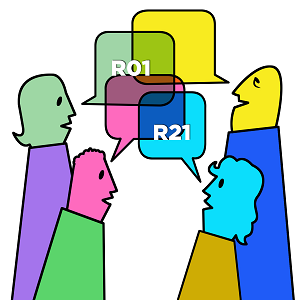 With only two years of support and limited funding, R21s do not carry the cachet of an R01. They usually don’t allow a researcher to move a field forward substantively. Ominously, analyses within NIH indicate that those who receive R21 awards are no more likely to get R01s than those without prior funding.

In these hard times, you might ask: Isn’t it time to cut frills like the R21 and sustain the core business? Pay more R01s!

But, not so fast! R21 awards fill an important gap.

The reason why the NIH created R21 awards was because the research community identified a problem with R01s. The informal but powerful demand for a tried-and-true methodology, a validated animal model, or a well-established neuropsychological test is understandable when reviewers are considering high-cost, long-term projects. Why should reviewers give enthusiastic ratings to a project that could flop because the animal model fails, the test lacks reliability, or weaknesses appear in the methodology?

Yet that sensible urge is a drive towards conservatism. How do we introduce new models, tests, and procedures when R01 reviewers evaluate them so harshly? As these new concepts advance a scientific field, biasing the odds against them seems foolhardy. But that is appropriate behavior in review of R01s.

It is in that spirit that the R21 award was created. It is a “stir-the-pot” award. It allows new tests, animal models, drug targets, or procedures to be reviewed and funded. R21 research validates concepts and brings them into the literature.

A word to the wise—the point is NOT to collect pilot data for your own future R01. Instead, you establish the evidence for a new concept (model, test, or procedure) that you may use in your research, as will others in their research.

Our evaluation: R21 research is published in journals with higher impact factors.

At the NIA, we evaluated our funded R21 awards two years ago. We found that the average impact factor for journals where R21s were listed as the source of support for a paper was higher than the average impact factor for publications citing other research grant types that we considered. That’s not surprising. If R21s are being innovative, as is intended, then they will have publications that appear in noticeable journals.

And so, we changed our ways to encourage R21 applications.

In fiscal year 2012, we stopped applying administrative budget cuts to R21s (and also to R03s). We meant to encourage these awards.

These days, we divvy up a budget that is not increasing. As success rates almost inevitably tumble, then the risk of conservatism surely increases. Reviewers and EVEN NIA staff(!) start to think: After all, we have little money to invest. Let’s be sure that what we recommend is likely to succeed.

R21s counter that conservatism. When budgets are shrinking it is more important than ever that we keep doors open to innovation and change. An award program that targets those features makes sense.

What kinds of R21 applications does the NIA accept?