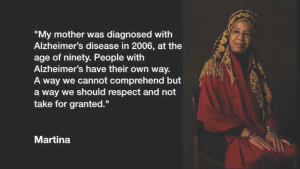 Inspired by the caregivers who supported his father with Alzheimer's disease, Raymond W. Holman, Jr., has photographed more than 80 people who have dedicated themselves to caring for others. Mr. Holman is an award-winning photographer whose photographs have been featured in the Philadelphia Inquirer and Philadelphia Daily News and exhibited at the African American Museum in Philadelphia. A selection of the portraits were exhibited at the Perelman Center for Advanced Medicine at the University of Pennsylvania. This project is featured in the Penn Memory Center's creative space, "Making Sense of Alzheimer's."

Let us know if you found this resource useful!