Behavioral and Lifestyle Interventions for Prevention and Treatment

Researchers are also investigating behavioral patterns and other lifestyle choices that may prevent dementia or slow the progression from mild cognitive impairment to dementia. These studies of nondrug approaches are based on results from population studies that can identify groups of people with certain lifestyle factors, such as a higher level of physical activity, who may also have a lower risk of dementia. Scientists can then design and conduct interventional studies to investigate whether changes in these lifestyle factors really can cause changes in dementia risk. Results from carefully controlled clinical trials where interventions are randomly assigned to participants can provide strong evidence about the causal role of lifestyle factors in dementia risk.

Section 3 of the NIA-Funded Active Alzheimer’s and Related Dementias Clinical Trials and Studies list shows more than 100 nondrug clinical trials in progress. Today, NIH supports studies of a variety of approaches, including whether increasing physical activity, making healthy dietary choices, or getting sufficient sleep may improve cognitive health. Researchers have also developed other approaches to try to help adults who are concerned about cognitive impairment or dementia, including studies to test the next generation of computerized cognitive training interventions. 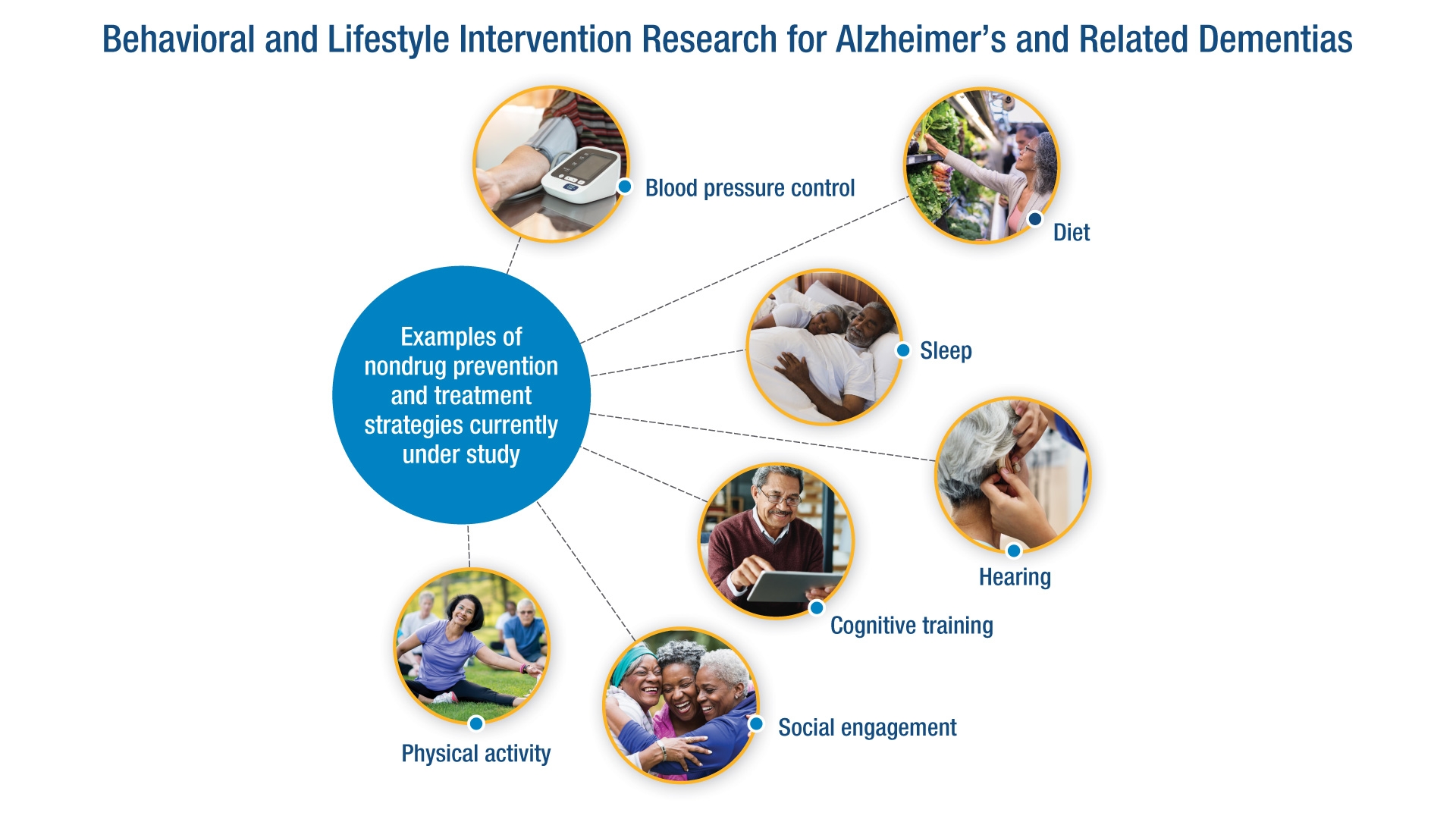 This increase in activity followed an NIH-supported systematic review in 2011 to explore the results from already completed studies to determine whether there was sufficient scientific evidence for any prevention approaches that could be shared as public health recommendations about specific ways to prevent dementia. After analyzing the available medical literature, the reviewers concluded there was not yet enough evidence to make such recommendations and pointed to the need for additional work to increase the level of evidence.

Still, because many factors were robustly associated with improvements in cognitive outcomes in observational studies, researchers continued to explore the connection between lifestyle choices and the development of dementia. By 2015, enough new data had accumulated to justify another systematic review of the literature. Based on this rigorous analysis, a National Academies of Sciences, Engineering, and Medicine report identified three areas of research as being supported by “encouraging although inconclusive” evidence: blood pressure management for people with hypertension, cognitive training, and increased physical activity. In addition to these areas, the report suggested pursuing other approaches to reducing the risk of developing dementia, including making certain dietary changes, improving sleep quality, and enhancing social engagement.

NIH continues to support investigations in all these areas to better understand the potential links between these and other lifestyle interventions and dementia. In 2019, investigators with the NIH-funded Systolic Blood Pressure Intervention Trial (SPRINT) published even stronger evidence for the benefits of blood pressure management:

Several previous observational studies also suggested that people who have uncontrolled high blood pressure have a greater chance of accumulating white matter lesions and also of experiencing cognitive disorders and dementia later in life, as described in detail with references on NIH’s Mind Your Risks website.

For a more in-depth look at the research implementation milestones in this area, including progress and accomplishments, visit www.nia.nih.gov/research/milestones/translational-clinical-research-non-pharmacological.

Find a list of references for this section in the PDF version.