Vision impairment is associated with as many as 100,000 U.S. dementia cases

Up to 100,000 U.S. dementia cases could have potentially been prevented with improved eye care, according to an NIA-funded study published in JAMA Neurology. 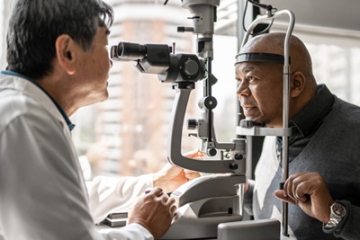 While the search for breakthrough drugs or interventions that could be treatments for Alzheimer’s disease and related dementias continues, scientists are also exploring existing ways to address modifiable risk factors for these diseases.

The Lancet Commission on Dementia Prevention, Intervention, and Care had previously expanded its list of other modifiable risk factors for dementia. These include factors such as hearing loss, high blood pressure, obesity, smoking, lack of exercise, diabetes, brain injury, excessive alcohol consumption, and exposure to air pollution.

This newer research featured data from the NIA-funded University of Michigan Health and Retirement Study (HRS), a longitudinal study tracking changes in health and economic circumstances for more than 20,000 older adult volunteers. The scientists found that one of the top preventive actions that may reduce risk for Alzheimer’s and related dementias is getting vision problems corrected, through methods such as eye exams, eyeglasses, and cataract surgery.

Investigators noted that about 1.8% of U.S. dementia cases were associated with visual impairment, and projected that by 2050, that total would rise to around 250,000 cases. The investigators also showed that incidence of vision impairment in older adults was higher for Hispanics, at 11%, compared to 8.3% on average overall for Blacks and non-Hispanic Whites.

In an accompanying editorial, the scientists noted that these types of correctable vision impairment cases are concerning because, comparable to hearing loss, there is growing evidence that vision problems add additional cognitive load to the brain and are linked to shifts in brain function and structure similar to those seen in dementia. These destructive impacts are believed to be compounded by loss of stimuli that can result when older adults with untreated sensory impairments reduce their participation in their previous daily routines and social activities.

The researchers found that existing vision correction technologies and treatments, including eyeglasses and cataract surgery, are underutilized in the U.S. and globally, especially among disadvantaged communities. They concluded that additional studies are needed to test if addressing correctable vision problems can be an effective intervention to protect cognitive health.

These activities relate to NIA’s AD+ADRD Research Implementation Milestone 1.D, “Develop state-of-the-art protocol for assessing dementia on large nationally representative samples that (a) includes racial/ethnic subsamples large enough to support disparities research and (b) is adaptable for use in comparable studies around the world.”