Blood vessels in the brain are made up of several different cell types with specific molecular profiles, and changes in the molecular makeup of these blood vessels are linked to dementia, according to two related NIA-supported studies. These studies, which were both published in Nature, are comprehensive analyses of blood vessels in the human brain on a single-cell level. 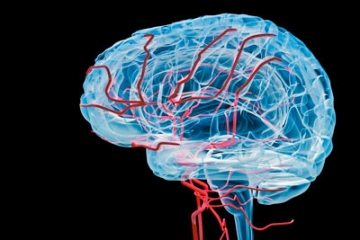 The human brain has a robust blood supply that is critical to brain health, and reduced blood flow to the brain is associated with dementia. Previous studies looking at the cells that make up blood vessels in the brain have largely relied on animal models. In these new studies, researchers developed innovative methods to collect and analyze individual cells from blood vessels in donated human brain samples.

In one study, researchers led by a team at the Massachusetts Institute of Technology isolated and analyzed 16,681 cells from small blood vessels in postmortem brain samples and samples from brain surgeries. The researchers measured how many RNA copies of genes were in each cell to estimate which proteins — and how much of them — the cell was making. By grouping cells based on their levels of specific RNAs, the researchers identified 11 different types of blood vessel cells. They found that RNA levels varied among arteries, veins, and capillaries, suggesting that these types of blood vessels were made up of unique groups of cells.

After establishing a baseline of RNA levels in healthy blood vessels, the researchers measured RNA levels in 3,945 blood vessel cells from post-autopsy brain samples from people who had Huntington’s disease, an inherited brain disorder that can cause dementia. They found higher levels of RNA from genes that are linked to the immune response and lower levels of RNA from genes that help keep the blood-brain barrier intact. The blood-brain barrier, a specialized layer of tissue formed by the small blood vessels of the brain, controls which molecules can pass from the bloodstream to the brain and vice versa. The blood-brain barrier is of special interest to researchers because it helps keep the brain healthy, but can also prevent drugs from reaching the brain, limiting treatment options for brain disorders.

In the other study, researchers led by teams at Stanford University and the University of California, San Francisco, developed a method called VINE-Seq to isolate and analyze 143,793 cells from blood vessels in the brain. They used post-autopsy brain samples from both people who had Alzheimer’s disease and those who had healthy brains. These researchers also identified several different cell types based on RNA profiles and found differences in RNA levels among cells from arteries, veins, and capillaries. The researchers found that RNA from 383 out of the 651 genes linked to Alzheimer’s — and 30 out of the 45 genes most strongly linked to this type of dementia — were found in blood vessel cells. Compared with the healthy brain specimens, samples from people who had Alzheimer’s had fewer healthy blood vessels and lower levels of RNA from genes that help keep the blood-brain barrier intact.

Results from these two studies provide a foundation for future research on ways to keep blood vessels healthy to prevent or treat dementia. The findings may also help researchers develop new ways to improve drug delivery across the blood-brain barrier to treat brain disorders. Future studies will help clarify whether changes in these blood vessels are caused by dementia or contribute to its development.

These activities relate to NIA’s AD+ADRD Research Implementation Milestone 2.Q, “Foster basic science research on neurovascular unit function and how it is impacted by the following: aging, cardiovascular disease, AD pathology and genetics.”