From 'trash' to treasure: Exosomes could shape a blood test for early detection of Alzheimer's

Exosomes—tiny particles that are produced by all types of cells and circulate in the bloodstream—could be the basis for a blood test to diagnose Alzheimer’s disease about 4 years before noticeable symptoms emerge. The results from a study led by NIA Intramural Research Program (IRP) scientists were reported July 15 in JAMA Neurology. 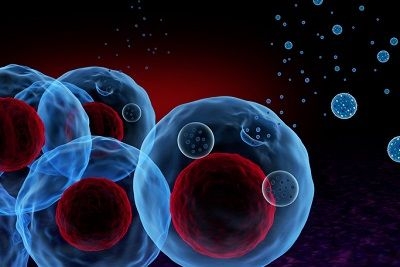 Exosomes, also known as extracellular vesicles, were dismissed for decades as cellular trash. The tiny vesicles have since been found to communicate cellular messages over long distances and carry valuable information in their cellular cargo of proteins, metabolites, lipids, and nucleic acids. Scientists are researching these biochemicals in order to gather information about health and disease in various body systems.

The NIA team has been exploring the potential of neuronal exosomes as “windows to the brain” with the potential to be a low-cost, minimally invasive way to distinguish healthy people from those in the early stages of Alzheimer’s disease. Current methods to help diagnose Alzheimer’s disease are expensive and involve radiation (positron emission tomography) or require a lumbar puncture to analyze cerebrospinal fluid.

In this study, they examined several years of blood samples from 350 participants (average age, 78), including 128 who eventually developed Alzheimer’s, and 222 who remained cognitively normal. They isolated neuronal exosomes and found that those with larger diameters and higher levels of phosphorylated tau protein successfully predicted Alzheimer’s disease about 4 years before noticeable symptoms developed (with an average accuracy of more than 80 percent). The team then validated the biomarkers using 64 samples (average age, 73) from the Johns Hopkins Alzheimer’s Disease Research Center.

The scientists view these findings as further evidence for neuronal exosomes as a potential key to a low-cost, noninvasive blood test for Alzheimer’s. Future goals include combining these with additional exosomal biomarkers to determine a model for predicting Alzheimer’s and other neurodegenerative diseases.