An innovative cardiac rehabilitation intervention started earlier and more custom-tailored to the individual improved physical function, frailty, quality of life, and depression in hospitalized heart failure patients, compared to traditional rehabilitation programs. Supported by the National Institute on Aging (NIA), part of the National institutes of Health, these new study results were published May 16 in the New England Journal of Medicine and also presented at the American College of Cardiology’s 70th Annual Scientific Session. 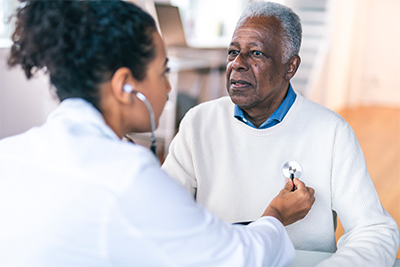 “Designing earlier and more personalized individual-specific approaches to heart failure rehab shows great promise for improving outcomes for this common but complex condition that is one of the leading causes of hospitalization for older adults,” said NIA Director Richard J. Hodes, M.D. “These results mark encouraging progress on a path to better overall quality of life and physical function for the millions of older Americans who develop heart failure each year.”

In an earlier pilot study, Kitzman and his colleagues at Duke University, Durham, North Carolina, and the Sidney Kimmel Medical College at Thomas Jefferson University, Philadelphia, found striking deficits in strength, mobility and balance, along with the expected loss of endurance in older patients with acute heart failure, the vast majority of whom were categorized as frail or pre-frail. The team decided to focus on improving patients’ physical function, which already weakened by chronic heart failure and age, was worsened by the traditional cardiac hospital experience featuring lots of bedrest and resulting in loss of functions that tended to persist after discharge.

The REHAB-HF team designed earlier and more customized exercise programs that emphasized improving balance, strength, mobility and endurance. They also began REHAB-HF during a patient’s hospital stay when feasible instead of waiting until the traditional six weeks after discharge. After release from the hospital, the study participants shifted to outpatient sessions three times per week for three months.

Compared to a control group that received usual cardiac rehab care, REHAB-HF participants showed marked gains in measures of physical functioning and overall quality of life, including significant progress in Short Physical Performance Battery, a series of tests to evaluate lower extremity function and mobility, and a six-minute walk test. They also had notable improvements in self-perception of their health status and depression surveys compared to pre-trial baselines. More than 80 percent of REHAB-HF participants reported they were still doing their exercises six months after completing their participation in the study.

“These findings will inform choices of heart failure rehabilitation strategies that could lead to better physical and emotional outcomes,” said Evan Hadley, M.D., director of NIA’s Division of Geriatrics and Clinical Gerontology. “Tailored interventions like REHAB-HF that target heart failure’s related decline in physical abilities can result in real overall benefits for patients.”

The study did not show significant differences in related clinical events including rates of hospital readmission for any reason or for heart-failure related rehospitalizations. The research team plans to further explore that and other issues through future expansions of REHAB-HF into larger and longer-term trials with broader participant subgroups.