Scientists funded by the National Institutes of Health have discovered a potential strategy for developing treatments to stem the disease process in Alzheimer’s disease. It’s based on unclogging removal of toxic debris that accumulates in patients’ brains, by blocking activity of a little-known regulator protein called CD33.

“Too much CD33 activity appears to promote late-onset Alzheimer’s by preventing support cells from clearing out toxic plaques, key risk factors for the disease,” explained Rudolph Tanzi, Ph.D., of Massachusetts General Hospital and Harvard University, a grantee of the NIH’s National Institute of Mental Health (NIMH) and National Institute on Aging (NIA). “Future medications that impede CD33 activity in the brain might help prevent or treat the disorder.”

Tanzi and colleagues report on their findings April 25, 2013 in the journal Neuron.

“These results reveal a previously unknown, potentially powerful mechanism for protecting neurons from damaging toxicity and inflammation,” said NIMH Director Thomas R. Insel, M.D. “Given increasing evidence of overlap between brain disorders at the molecular level, understanding such workings in Alzheimer’s disease may also provide insights into other mental disorders.”

Variation in the CD33 gene turned up as one of four prime suspects in the largest genome-wide dragnet of Alzheimer’s-affected families, reported by Tanzi and colleagues in 2008. The gene was known to make a protein that regulates the immune system, but its function in the brain remained elusive. To discover how it might contribute to Alzheimer’s, the researchers brought to bear human genetics, biochemistry and human brain tissue, mouse and cell-based experiments.

They found over-expression of CD33 in support cells, called microglia, in postmortem brains from patients who had late-onset Alzheimer’s disease, the most common form of the illness. The more CD33 protein on the cell surface of microglia, the more beta-amyloid protein and plaques – damaging debris – had accumulated in their brains. Moreover, the researchers discovered that brains of people who inherited a version of the CD33 gene that protected them from Alzheimer’s conspicuously showed reduced amounts of CD33 on the surface of microglia and less beta-amyloid.

Brain levels of beta-amyloid and plaques were also markedly reduced in mice engineered to under-express or lack CD33. Microglia cells in these animals were more efficient at clearing out the debris, which the researchers traced to levels of CD33 on the cell surface.

Evidence also suggested that CD33 works in league with another Alzheimer’s risk gene in microglia to regulate inflammation in the brain.

The study results – and those of a recent rat study that replicated many features of the human illness – add support to the prevailing theory that accumulation of beta-amyloid plaques are hallmarks of Alzheimer’s pathology. They come at a time of ferment in the field, spurred by other recent contradictory evidence suggesting that these presumed culprits might instead play a protective role.

Since increased CD33 activity in microglia impaired beta-amyloid clearance in late onset Alzheimer’s, Tanzi and colleagues are now searching for agents that can cross the blood-brain barrier and block it. 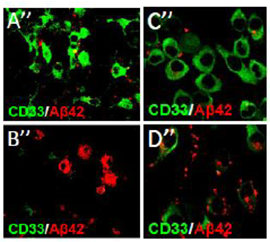 Activity of a regulator protein called CD33 (green) clogs removal of brain-damaging debris, beta-amyloid protein (red), by support cells, microglia. Left: Microglia of normal control mice (A”) show more CD33 and less beta-amyloid than mice in which CD33 expression is experimentally knocked-out (B”). Right: Little beta-amyloid can be seen in microglia of a mouse line in which CD33 is over-expressed (C”), compared to microglia of mice in which CD33 is experimentally inactivated (D”). Evidence from post-mortem human brains indicates that CD33 is similarly over-active in Alzheimer’s disease, suggesting that a treatment that impedes it might help treat or prevent the disease.
Source: Rudolph Tanzi, Ph.D., of Massachusetts General Hospital and Harvard University

NIH-funded scientists have discovered a potential strategy for developing treatments to stem the disease process in Alzheimer’s disease. It is based on unclogging removal of toxic debris that accumulates in patients’ brains, by blocking activity of a little-known regulator protein called CD33. Too much CD33 activity may promote late-onset Alzheimer’s by preventing support cells from clearing out toxic plaques. Future medications that impede CD33 activity might help prevent or treat the disorder. Dr. Thomas Lehner, director of NIMH’s Office of Genomics Research Coordination, explains the significance of the new findings.

The mission of the NIMH is to transform the understanding and treatment of mental illnesses through basic and clinical research, paving the way for prevention, recovery and cure. For more information, visit the NIMH website.

The NIA leads the federal government effort conducting and supporting research on aging and the health and well-being of older people. It provides information on age-related cognitive change and neurodegenerative disease specifically at its Alzheimer’s Disease Education and Referral (ADEAR) Center at www.nia.nih.gov/alzheimers. For expanded information on Alzheimer’s care and resources, please visit the federal government’s portal website www.alzheimers.gov. Information on health and on aging generally can be found at www.nia.nih.gov. To sign up for e-mail alerts about new findings or publications, please visit either NIA website.