Proteins linked to neurological disorders may be regulated in different ways in various tissue types, a new study shows. Funded in part by NIA and published in Nature Neuroscience in September 2021, the study identified several regions of DNA linked to protein levels in the brain, plasma, and cerebrospinal fluid. This is the first large-scale study of its kind to use multiple sample types. 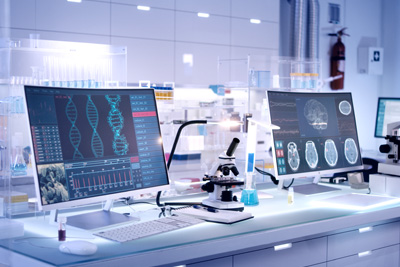 Our DNA helps determine our risk of developing many health conditions, including diseases of the brain such as Alzheimer’s disease and related dementias. Researchers use genome-wide association studies (GWAS) to find regions of DNA that are linked to specific conditions. Although such studies provide valuable information, GWAS results alone do not show how differences in our DNA control whether our bodies make a specific protein or how much of each protein we make.

For this new study, scientists wanted to better understand how changes in DNA control the levels of proteins that are linked to neurological disorders. The researchers, led by a team at the Washington University School of Medicine in St. Louis, compared GWAS results with measurements of protein levels in people with and without Alzheimer’s. Along with GWAS analysis, they measured the levels of 1,305 proteins in cerebrospinal fluid, plasma, and brain samples.

The study team found that changes in certain regions of DNA were linked to the levels of specific proteins in the samples they tested. Such regions of DNA are called protein quantitative trait loci (pQTL). They identified 274 pQTLs in cerebrospinal fluid samples, 127 in plasma samples, and 32 in brain samples. Some proteins were linked to only one pQTL, while other proteins were linked to many pQTLs. Likewise, some pQTLs were linked to more than one protein or were found in more than one sample type. For example, a single pQTL in the region of DNA that houses the apolipoprotein E (APOE) gene was linked to 13 different cerebrospinal fluid proteins. A form of this gene called APOE ɛ4 is the strongest known genetic risk factor for Alzheimer’s. The genes encoding these proteins were located on different chromosomes, suggesting coordinated but complex mechanisms regulating protein expression.

Additionally, the researchers found pQTLs associated with three proteins linked to the risk of Alzheimer’s in cerebrospinal fluid samples, 13 proteins in plasma samples, and seven proteins in brain samples. They also found pQTLs associated with proteins that are linked to the risk of Parkinson’s disease, frontotemporal dementia, amyotrophic lateral sclerosis (ALS), and stroke. They found 25 existing drugs that target these proteins, suggesting that the drugs could be repurposed to treat those conditions.

The researchers noted that all participants were of European ancestry and that their methods of measurement might have led to inaccuracies in estimating protein levels. To address the latter, they confirmed their results by analyzing similar samples from other studies.

Proteins that have the same pQTLs might be controlled by the same factors and may work together in the same pathway. Discovering how different proteins work together to raise or lower the risk of Alzheimer’s and other neurological disorders could help researchers find new biomarkers and treatments for these conditions.

All results can be downloaded from https://www.niagads.org/datasets/ng00102 and interactively accessed through a PheWeb42-based website, the Online Neurodegenerative Trait Integrative Multi-Omics Explorer (ONTIME; https://ontime.wustl.edu/).