People who develop type 2 diabetes at a younger age have an increased risk of dementia, according to a new study funded in part by NIA and published in JAMA on April 27. 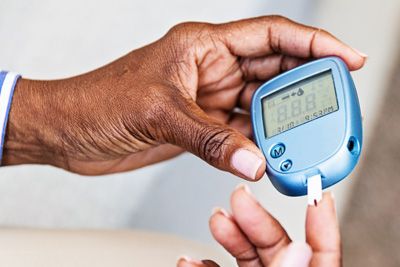 Type 2 diabetes is a serious chronic condition that affects many older adults. This disease is becoming more common and is occurring at younger ages. Previous studies have shown that diabetes is associated with an increased risk of dementia. However, these studies did not address whether the age at which a person is diagnosed with type 2 diabetes influences this risk.

For this new research, scientists led by a team at the Université de Paris explored the link between age of onset of type 2 diabetes and the risk of dementia. They examined data from the Whitehall II Study, a long-term longitudinal study of health in British government employees. Participants were between the ages of 35 and 55 when they enrolled. The researchers used results from blood tests conducted every four to five years and electronic health records (EHRs) spanning about 32 years to identify participants who had type 2 diabetes or were taking medicine to treat this condition. The team used EHRs to determine which participants were later diagnosed with dementia.

The researchers believe that in people with type 2 diabetes, insulin resistance, problems with a person’s blood vessels, and frequent changes in blood sugar levels over several years might cause problems with blood flow and metabolism in the brain. Signs of dementia usually start more than a decade before diagnosis, and further research is needed to understand how type 2 diabetes affects dementia progression.