A novel protein signature may have the potential to serve as a biomarker for resistance to Alzheimer’s disease and cognitive decline, according to a new study with a group of centenarians and their offspring. The researchers found a correlation between 16 proteins found in blood and the ε2 form of the apolipoprotein E (APOE) gene. The study, led by investigators at Boston University in collaboration with the NIA Intramural Research Program and Novartis, was reported in Aging Cell. 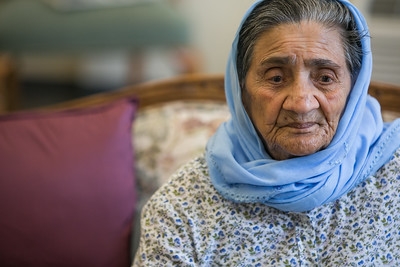 Having the ε2 form of the APOE gene is thought to be neuroprotective, whereas having the ε4 form is associated with increased risk of late-onset Alzheimer’s disease and poor cognitive function. The ε2 form, which is much rarer than ε4, is more commonly detected among those over 100 years old and their children than in the general population. APOE ε2 also seems to promote longevity, but the precise biological mechanisms for it being neuroprotective and promoting long life are not known.

Because recent studies showed that APOE-associated protein products can be found in blood serum samples, the researchers analyzed serum to find the biological products of APOE ε2. Serum was collected from 222 people in the NIA-supported New England Centenarian Study, including 51 with APOE ε2.

Using a protein profiling platform to analyze several thousand proteins in serum that corresponded to more than 4,000 genes, the researchers found that 16 proteins were associated with different APOE genotypes. They explored the different gene expression profiles of 16 proteins in brains of people with late-onset Alzheimer's disease and healthy controls and showed that the signatures were significantly different between the two groups.

Next, they confirmed their findings by repeating the analysis with serum and plasma samples from other cohort studies. Finally, they examined the association between the 16 proteins and changes in cognitive function in the centenarians and found that seven of these proteins correlate with patterns of cognitive function.

If future studies show that the signature proteins are driving cognitive health, rather than merely being associated with it, these proteins could serve as biomarkers in intervention studies targeting APOE ε2. In addition, the protein signature identified in this study could be developed into an early detection test of resistance to developing Alzheimer’s.

These activities relate to NIA’s AD+ADRD Research Implementation Milestone 2.K, "Create new research programs that use data-driven, network biology approaches aimed at understanding the (epi)genetics and complex biology of cognitive resilience in individuals with high genetic risk for dementia and in individuals with exceptional longevity."