Older adults who take a cholesterol-lowering drug known as a statin may have a lower risk of developing Parkinson’s-like movement symptoms, according to an NIA-funded observational study published in Neurology. Fatty plaques in brain blood vessels have been linked to parkinsonism, an umbrella term for conditions that cause movement symptoms associated with Parkinson’s disease. The researchers found that taking a statin was associated with improved brain blood vessel health and decreased parkinsonian signs in older adults. 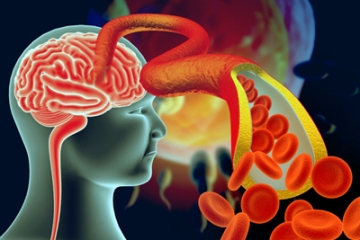 Parkinson’s is a serious nervous system disorder that affects less than 5% of the population; however, approximately 30% of adults over age 65 have parkinsonism. People with parkinsonism experience movement symptoms seen in Parkinson’s, including characteristic changes in gait, slowness of movement, tremor, and muscle stiffness. These undesirable symptoms can also increase the risk of falls, disability, and dementia.

People with evidence of cardiovascular disease in their brains are more likely to develop parkinsonism. In these cases, fatty plaques build up on the walls of brain blood vessels, making them stiff. Statins — drugs used to lower cholesterol and other fats — can help eliminate the plaques and keep brain blood vessels healthy. The study researchers at the NIA-supported Alzheimer’s Disease Research Center at Rush University Medical Center in Chicago sought to explore whether statins could be a sound therapeutic strategy to treat or prevent parkinsonism.

The research team followed 2,841 older adults enrolled in studies at the Rush Alzheimer’s Disease Center for an average of six years. They noted whether each participant took a statin and continually tested for signs of parkinsonism. The team also later measured fatty plaques in the brain blood vessels of the 1,044 deceased participants. Results showed that older adults who took a statin had better brain blood vessel health and a lower risk of developing parkinsonism. The researchers also performed statistical analyses that suggest the ability of statins to reduce brain blood vessel stiffness is at least partly responsible for the decrease in parkinsonism risk.

Currently, there are limited options for treating movement problems that occur later in life, and these findings demonstrate the potential of using statins to treat parkinsonism. Still, the authors note several limitations to their study. Because the study was observational, randomized controlled trials are needed to determine if statins can prevent or treat parkinsonism. In addition, the participants in the study were primarily White, highly educated older adults. Future studies should examine the association between statin use and parkinsonism in a set of participants that more accurately reflects the diversity of the population.