What motivated you to do your postdoctoral fellowship at NIA?

The United States has always been a great place for scientists and researchers. After earning my Ph.D., I wanted to further develop my skills and gain new ones. 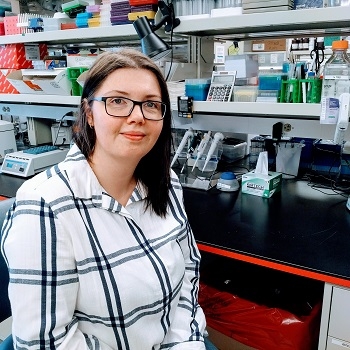 I have had a long-standing interest in aging, mainly because of my grandmothers. I watched them age and also saw the impact of their aging on them and their families. I was drawn towards neurocognitive aging. For example, I found it fascinating to teach a new board game to my grandmother and play with her. I wanted to contribute to this field.

What is your area of research focus and its impact?

My area of research involves retinoic acid (a metabolite of vitamin A) signaling in the hippocampus of aged animals with and without memory impairment. This is not something that has been extensively studied, so it is even more exciting for me.

The role of retinoic acid in memory and keeping excitation/inhibition balance has been recently emerging. My work at NIA shows that aged rats with memory impairment have disrupted hippocampal retinoic acid signaling. It manifests itself in increased synthesis and catabolism of retinoic acid and higher presence of retinoic acid receptor outside of nucleus. This receptor is involved in the homeostatic synaptic scaling (which maintains network stability), and allows insertion of glutamate receptor, which increases the synaptic strength.

The entire system needs to be balanced, but in case of aged impaired rats, there is a shift in excitation/ inhibition balance which might contribute to spatial memory impairment.

Who or what has been the greatest influence in your career?

I wish that I could single out a few people but I can't. I have been influenced by the people that I have worked with as well as many outside of my work. I think it is incredibly important to have a support network around you. I am a religious person and my faith is something that has been constant all my life and I often rely on it, especially in the extreme (happy or difficult) times.

I would not be able to do what I am doing without the support of my husband, Ian, and our families. Watching our kids grow and develop has given me this extra boost at work, and since I became a mother, I have definitely learned to be more careful and efficient with my time.

Having a PI who trusted me with a different line of work and allowed me to pursue my interests has been a really valuable experience. My co-workers have been really supportive too and I have managed to establish a collaboration with someone that I have worked with before.

What’s next for you and what is beyond?

I have accepted a Lecturer position in Neuroscience at the Keele University in England, UK. I am stepping away from the bench, although I am not closing that door just yet. I am looking forward to moving more into teaching and mentoring, which is my passion. Ultimately, I would like to support, encourage, and empower a future generation of scientists so they can go on to do marvelous things.

What advice do you have for postdocs at the NIA?

Gain as many skills as possible, some of these skills may not seem relevant to your current duties but they may prove very useful in the future.

What are some of your hobbies in your spare time?

Family time is extremely important, so I devote a lot of time to my family. I love reading, although since having kids I do not have too much time for it. That being said, now I have a very good excuse to read kids’ books with my children. I cannot wait until they are big enough to play Scrabble with me – my favorite board game. In the meantime, we play more age appropriate games. I love listening to and playing music, swimming, cycling, walking and hill/mountain climbing. We do walks in the park with kids regularly.

I am also taking an active part in the community polish school at the Holy Rosary Church in Baltimore, where I teach kids the polish language and culture on the weekends.

What is your biggest takeaway from your experience as an NIA postdoc?

Having access to training courses, newest technology, experts in many fields are the bonus of working at the NIA. But the biggest takeaway is the people I have met. If I were to give some advice to a younger me, who just started at NIA, I would definitely encourage that young post-doc to become a part of committees and meet people. Of course, I ended up doing that and formed many relationships that will continue to grow for many years.