Exposure to social stress was associated with accelerated aging of the immune system, according to an NIA-funded study recently published in PNAS. The body’s immune system changes as people age, and there’s large variability in these changes. The study, led by researchers at UCLA, investigated whether social stressors added to immune system decline. 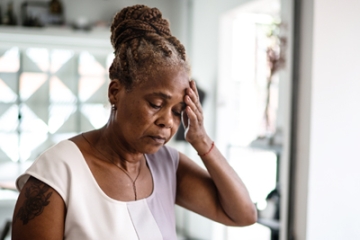 The researchers analyzed data from more than 5,500 people enrolled in the Health and Retirement Study, a long-term, nationally representative study of Americans over age 50. The researchers measured stress by analyzing responses to questions about exposure to various types of social stress, including discrimination, trauma, and other life events, such as unemployment. They also analyzed the participants’ immune profiles — a snapshot of immune system function — by drawing blood and measuring white blood cell levels, specifically T lymphocytes (also called T cells). T cells are an essential part of the immune system and help the body fight off infection.

Results showed that exposure to social stress was associated with a greater proportion of T cells committed only to fighting infections like those already encountered and fewer T cells that could adapt to new challenges, indicative of accelerated immune aging. The association between social stress and T cells was still present even after controlling for education, smoking, drinking, body mass index, and race or ethnicity.

Researchers did find that, after controlling for lifestyle factors such as diet and exercise habits, the connection between stress and accelerated immune aging was not as strong. These findings suggest that improving diet and exercise behaviors in older adults may help offset the immune aging associated with stress.

Increased immune aging is associated with chronic diseases, weakened response to acute infections, increased risk of pneumonia, reduced efficacy of vaccines, and organ system aging. This study provides important insights into the effect of social stress on immune aging, highlighting the key role of health behaviors and social-environmental conditions. It also identifies potential intervention points that may be useful in addressing inequalities in aging.