Human beings are social creatures. Our connection to others enables us to survive and thrive. Yet, as we age, many of us are alone more often than when we were younger, leaving us vulnerable to social isolation and loneliness—and related health problems such as cognitive decline, depression, and heart disease. Fortunately, there are ways to counteract these negative effects. 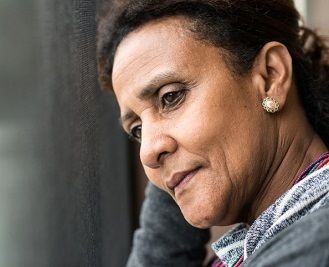 NIA-supported researchers are studying the differences between social isolation and loneliness, their mechanisms and risk factors, and how to help people affected by these conditions. “NIA is interested in exploring potential interventions to address social isolation and loneliness, which are both risk factors for poor aging outcomes,” said Lisbeth Nielsen, Ph.D., of NIA’s Division of Behavioral and Social Research.

Social isolation and loneliness do not always go together. About 28 percent of older adults in the United States, or 13.8 million people, live alone, according to a report by the Administration for Community Living’s Administration on Aging of the U.S. Department of Health and Human Services, but many of them are not lonely or socially isolated. At the same time, some people feel lonely despite being surrounded by family and friends.

Spread the Word About Social Isolation

People who find themselves unexpectedly alone due to the death of a spouse or partner, separation from friends or family, retirement, loss of mobility, and lack of transportation are at particular risk.

Conversely, people who engage in meaningful, productive activities with others tend to live longer, boost their mood, and have a sense of purpose. These activities seem to help maintain their well-being and may improve their cognitive function, studies show.

Much of what we know about the causes and effects of social isolation and loneliness comes from the groundbreaking research of the late John T. Cacioppo, Ph.D., former director of the Center for Cognitive and Social Neuroscience at the University of Chicago and an NIA grantee.

Dr. Cacioppo’s research found that being alone and loneliness are different but related. Social isolation is the objective physical separation from other people (living alone), while loneliness is the subjective distressed feeling of being alone or separated. It’s possible to feel lonely while among other people, and you can be alone yet not feel lonely.

A pioneer in the field of social neuroscience, Dr. Cacioppo passed away in March 2018. His wife and collaborator, Stephanie Cacioppo, Ph.D., continues this work as assistant professor of psychiatry and behavioral neuroscience at the University of Chicago and director of the university’s NIA-supported Brain Dynamics Laboratory.

“The misery and suffering caused by chronic loneliness are very real and warrant attention,” she said. “As a social species, we are accountable to help our lonely children, parents, neighbors, and even strangers in the same way we would treat ourselves. Treating loneliness is our collective responsibility.”

Although there is more to learn, the understanding of the mechanisms of action of loneliness and its treatment has increased dramatically since scientific investigation began more than two decades ago, according to Dr. Stephanie Cacioppo. Among the novel predictions from the Cacioppo Evolutionary Theory of Loneliness is that loneliness automatically triggers a set of related behavioral and biological processes that contribute to the association between loneliness and premature death in people of all ages. Research is headed toward the systematic study of these processes across generations, Dr. Cacioppo explained.

Understanding the biology of loneliness

Losing a sense of connection and community changes a person’s perception of the world. Someone experiencing chronic loneliness feels threatened and mistrustful of others, which activates a biological defense mechanism, according to Steve Cole, Ph.D., director of the Social Genomics Core Laboratory at the University of California, Los Angeles. His NIA-funded research focuses on understanding the physiological pathways of loneliness (the different ways that loneliness affects how your mind and body function) and developing social and psychological interventions to combat it.

For example, loneliness may alter the tendency of cells in the immune system to promote inflammation, which is necessary to help our bodies heal from injury, Dr. Cole said. But inflammation that lasts too long increases the risk of chronic diseases.

People who feel lonely may also have weakened immune cells that have trouble fighting off viruses, which makes them more vulnerable to some infectious diseases, he added.

NIA-supported research by Dr. Cole and others shows that having a sense of mission and purpose in life is linked to healthier immune cells. Helping others through caregiving or volunteering also helps people feel less lonely.

“Working for a social cause or purpose with others who share your values and are trusted partners puts you in contact with others and helps develop a greater sense of community,” he noted.

Previous studies have estimated the heritability of loneliness between 37 percent and 55 percent using twins and family-based approaches. “Individuals who are not prone genetically to feeling lonely may, for example, suffer much less from social isolation, while others feel lonely even though they are surrounded and part of a rich social life,” according to Nancy Pedersen, Ph.D., a professor of genetic epidemiology at the Karolinska Institutet in Stockholm, Sweden. “We are also interested in understanding what role socioeconomic status plays in such associations.”

Using data from twin studies, Dr. Pedersen and researchers found that both social isolation and loneliness are independent risk factors, and that genetic risk for loneliness significantly predicted the presentation of cardiovascular, psychiatric (major depressive disorder), and metabolic traits. Family history does not strongly influence this effect.

Beyond genetics, understanding social determinants of health, and the role of social and interpersonal processes in healthy aging and longevity, is another research direction at NIH. Scientists are beginning to apply this framework to research on social isolation and loneliness.

“Future research will need to clarify the extent to which loneliness and social isolation are malleable, and if so, what are the most effective approaches? Demonstrating that we can move the needle on these risk factors is a critical first step toward developing effective interventions,” said Dr. Nielsen. Research is also needed to clarify how great a change in loneliness or social isolation is required to achieve a meaningful change in health, she added.

“Whereas most researchers of isolation study the personal traits and behaviors of isolated individuals, my research focuses on the role that structural factors (i.e., institutions, social policies, ideologies) play in exacerbating the social isolation of vulnerable individuals,” said Dr. Portacolone. “For example, in my prior investigation of older residents of high-crime neighborhoods, who were mostly African-American older adults, a tension emerged between participants’ longing to participate in society and obstacles that made this participation difficult to attain.”

These structural obstacles included fear of being robbed, distrust of neighbors, limited availability of appropriate services, dilapidated surroundings, and limited meaningful and positive relationships. Having few friends or family members attuned to their concerns was another factor exacerbating social isolation. Study participants expressed a desire to be socially integrated, an idea that runs against the prevailing assumption that isolated older adults are alone by choice.

Similar patterns emerge in Dr. Portacolone’s ongoing investigation of older adults with cognitive impairment living alone. “One African-American study participant told me of her tendency to lock herself in the bathroom during family gatherings to cry and ‘let the tension out’ because her family members realize how concerned she is about her memory loss,” recalled Dr. Portacolone. “Other participants with Alzheimer’s disease noted that their friends were less eager to see them after they shared their diagnosis.”

Another structural obstacle is limited affordable services that address the specific needs of cognitively impaired people living alone. Home care aides are seldom trained to support older adults with cognitive impairment, and their fees are often too high for most older adults on a long-term basis, explained Dr. Portacolone. In addition, some older adults with cognitive impairment have had their driver’s license revoked, but they do not get help with replacement transportation, which dramatically increases their isolation.

As a result, older adults with cognitive impairment living alone spend much of their time managing their household and their health, Dr. Portacolone said. They are often reluctant to show they need help because they fear being forced to move from their homes.

“The primary takeaway from this research is that interventions to increase older adults’ social integration should address not only their behaviors, but their overall surroundings. We need to concentrate our attention on the influence of social policies, institutions, and ideologies in the everyday experience of isolated older adults,” Dr. Portacolone said.

Portacolone E, Perissinotto CM, Yeh J, et al.  “I feel trapped”: The tension between personal and structural factors of social isolation and the desire for social integration among older residents of a high-crime neighborhood. The Gerontologist 2018;58(1):79–88.