Two recent NIA-supported studies have found abnormal deposits of certain proteins — alpha-synuclein filaments, tau tangles, and beta-amyloid plaques — in the brains of individuals with a history of sleep disturbances. The findings, which were reported in Acta Neuropathologica and Current Biology, highlight the importance of sleep in healthy aging. 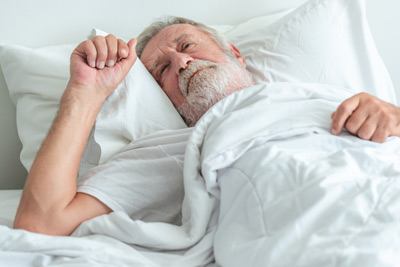 A team led by researchers at Boston University focused on people with chronic traumatic encephalopathy (CTE), which is a condition associated with repeated head injuries from boxing, football, or other activities. Previous research has shown that some people with repeated head injuries have a sleep disorder that causes them to move limbs and shout during dream activity. The disturbance occurs during the rapid eye movement (REM) phase of sleep. The research team set out to learn whether REM sleep disorder would be frequently found in people with CTE after repeated head injuries. A second aim was to find out whether the sleep disorder would be associated with the presence of Lewy bodies, which are accumulations of alpha-synuclein protein filaments, or with tau tangles in the brainstem region.

The study was conducted with brain tissue from 247 men with CTE resulting from contact sports. The tissue was obtained from the brain bank that is part of the NIH-supported Understanding Neurologic Injury and Traumatic Encephalopathy (UNITE) Study. The researchers found that 80 (one-third) of the men with CTE had probable REM sleep disorder, based on family members reporting that they acted out their dreams while sleeping. These men with sleep disorder were significantly more likely to have a longer history of repeated head injury through sports. The men with sleep disorder were also significantly more likely than men without sleep disorder to have the presence of Lewy bodies in their brain.

Whereas the Boston University team was interested in REM sleep disorder, a team led by researchers at the University of California, Berkeley, studied brain activity in non-REM sleep. During the non-REM sleep stage, the brain can clear toxins and other compounds, including beta-amyloid, which is implicated in Alzheimer’s and other brain disorders. In rodent studies, long-term restriction of sleep is linked to a rise in the level of beta-amyloid in the brain.

Following a group of nine men and 23 women between the ages of 70 and 80 that are part of the NIA-funded Berkeley Aging Cohort Study, the team measured non-REM sleep slow-wave activity and sleep quality, plus used PET brain imaging scans to track the development of beta-amyloid plaques. At the beginning of the study, the participants went to a sleep lab to assess sleep efficiency, which is the total amount of sleep as a percentage of total time in bed. After that, the participants received two to five PET scans over one to six years to track change in beta-amyloid plaques over time. Most participants had beta-amyloid plaques detected on the first PET scan.

Analysis revealed that those with lower slow-wave brain activity developed plaques faster than those with higher slow-wave activity. The researchers concluded that non-REM sleep in the lower frequency domain might predict future plaque accumulation. In addition, participants who had the least efficient sleep at the beginning of the study later had the greatest increase of beta-amyloid accumulation.

The researchers noted that they did not find statistically different changes in cognition over time related to the beta-amyloid accumulation. Measurable cognitive decline may not occur until years after plaques are detected on PET scans.

Further research in more people is needed to explore the relationships between sleep activity and the accumulation of alpha-synuclein, tau tangles, and beta-amyloid in the brain over time. But these measures of sleep activity may have the potential to be developed into markers that can predict the abnormal accumulation of proteins in the brain before cognitive decline and other symptoms of brain disease develop. For example, measuring sleep quality and disturbances with wearable devices may offer a noninvasive, repeatable, and safe way to screen for cognitive risk factors, even before cognitive symptoms of brain disorders develop.