New findings from big-data and open-science research are revealing clues about the molecular mechanisms of Alzheimer’s disease and new ways to discover potential therapeutic targets and biomarkers. These new discoveries were made by six research teams participating in the Accelerating Medicines Partnership Alzheimer’s Disease (AMP AD) program. AMP AD was established in 2014 as an NIH-led partnership among government, pharmaceutical industry, and nonprofit organizations that aims to transform the way we study the complex nature of Alzheimer’s disease. 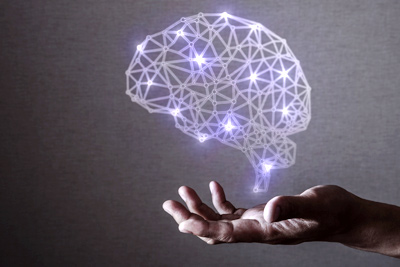 AMP AD uses an open-science research model that makes all data and methods rapidly available to the research community at large through the data sharing infrastructure, the AD Knowledge Portal. Since the Portal’s launch in 2015, more than 3,000 researchers world wide from the academic, biotech, and pharmaceutical industry sectors have used the data resources for research on Alzheimer’s and related dementias.

Alzheimer’s is a complex disease, and as it slowly develops, many normal biological processes in the brain and the body go awry, from inflammation, to blood vessels damage and neuronal death. Seven recent AMP AD reports showcase research advances related to the discovery of new drug candidate targets, identification of molecular subtypes of the disease, and new potential biomarkers that can serve as the basis for a precision medicine approach to therapy development.

Identifying ATP6VA1 gene as a candidate target for treatment: Researchers at the Icahn School of Medicine at Mount Sinai in New York generated several types of molecular data from 364 brain donors at different stages of Alzheimer’s. Using network modeling, a way to show data and its relationships, the team identified large sets of genes associated with the disease. Among the thousands of molecular changes associated with Alzheimer’s, the expression of a set of neuronal genes (neuronal network) was the most disrupted. Their analyses identified ATP6VA1 as a master regulator gene of this neuronal network and demonstrated that increasing its expression genetically, or by using a pharmacologic agent, led to improving neuronal function in cultured cells and in flies. These findings were published in Neuron and pave the way for new drug discovery efforts targeting ATP6VA1.

Finding and validating VGF gene as key regulator of Alzheimer’s: Another AMP AD study led by researchers at Icahn School of Medicine identified the VGF gene and protein as having a key role in protecting the brain against Alzheimer’s. This discovery was made possible by combining computational analyses that integrate large human Alzheimer’s molecular datasets, clinical features of Alzheimer’s, DNA variation, and data on gene- and protein expression with experimental studies in mouse models. The findings provide a new target for researchers seeking to develop drugs to treat or prevent Alzheimer’s. The report of the discovery of this gene as a key driver and its validation in mouse studies was published in Nature Communications.

Identifying different types of microglia associated with Alzheimer’s: An AMP AD research team at Columbia University conducted a study that measured the expression of genes in individual microglial cells purified from human brain samples obtained at autopsy and during neurosurgical procedures. This single cell profiling technology identified several molecular subtypes of microglia based on the pattern of gene expression. Follow-up validation studies in post mortem brain tissue showed that this microglia subtype was less abundant in Alzheimer's brains compared to control brains. These results, published in Nature Communications, will help design larger, more specific studies of the role of microglia subtypes in Alzheimer’s.

Using data to unfold and predict disease process: An AMP AD team led by researchers at Sage Bionetworks in Seattle used innovative computational approaches to make predictions about the sequence of molecular changes that lead to Alzheimer’s. The team used RNA sequencing data collected from a large collection of post-mortem tissue from Alzheimer’s and control brains. This modeling method, called the manifold learning method, predicted early-stage disease processes, such as RNA-splicing, mitochondrial function, and protein transport. Additionally, the method predicted several distinct molecular subtypes of late-onset Alzheimer’s. These predictions speak to the complex nature of the disease and the need to verify these observations in longitudinal studies where molecular signatures can be linked to different clinical features of the disease. These findings were published in Nature Communications.

Network modeling identifies molecular subtypes of Alzheimer’s: Using a large collection of human brain samples from different studies, a team led by researchers at Icahn School of Medicine also analyzed RNA sequencing data and identified three major molecular subtypes of Alzheimer’s. The subtypes, which are independent of age and disease stage, and are replicated across multiple brain regions, show how different combinations of biological pathways lead to brain degeneration. With further research and validation in larger groups, these molecular subtypes may help reveal how Alzheimer’s progresses and potential ways to slow or stop it. Their findings were published in Science Advances.

Identifying new biomarkers in spinal fluid: AMP AD researchers at Emory University identified groups of proteins (protein panels) associated with Alzheimer’s that could be identified in both brain and spinal fluid. These overlapping protein panels detected in the spinal fluid reflected changes in multiple biological process in the brain. The researchers found this by measuring 3,500 proteins in spinal fluid, and 12,000 proteins in a collection of postmortem brain samples, from patients with Alzheimer’s and cognitively normal study participants. The study also showed that these changes in the protein expression pattern were specific for Alzheimer’s. This work lays the foundation for the discovery of new fluid biomarkers for Alzheimer’s. These findings were published in Science Advances.

Investigating how being female may increase risk of Alzheimer’s: Duke University researchers and members of the Alzheimer’s Disease Metabolomic Consortium (ADMC) participating in the AMP AD program, analyzed the changes in the levels of 180 metabolites in the blood from more than 1,500 people who took part in the NIA-supported Alzheimer’s Disease Neuroimaging Initiative. The researchers reported that there are differences in a subset of blood metabolites associated with Alzheimer's based on sex and ApoE4 status. ApoE4 is the strongest Alzheimer's risk factor gene. Women with Alzheimer’s who carry the ApoE4 gene have a distinct metabolic pattern in blood. These metabolic changes suggest that females have a greater impairment of brain energy production than males. Dissecting metabolic differences in Alzheimer’s can identify specific pathways within specific patient subgroups and guide the way to personalized medicine.

The data and methods from the above studies are available and can be accessed by researchers across the world through the AD Knowledge Portal. The portal is the data repository for the AMP AD Target Discovery Program, and other NIA-supported team-science programs operating under open-science principles. Now in its sixth year, AMP AD is demonstrating the power of open science to enable the scientific community to investigate difficult scientific questions and jumpstart new drug discovery projects.

The studies outlined here were also supported by the following NIA grants (in order of appearance):

These AMP AD activities relate to NIH’s AD+ADRD Research Implementation Milestone 2.A, “Create new research programs that use data-driven, systems-based approaches to integrate the study of fundamental biology of aging with neurobiology of aging and research on neurodegeneration, AD and AD-related dementias to better understand the mechanism(s) of vulnerability and resilience in AD across all levels of biologic complexity (from cellular to population level) and to gain a deeper understanding of the complex biology and integrative physiology of healthy and pathologic brain aging;” Milestone 9.B, "Accelerate the development of the next generation CNS imaging ligands and biofluid molecular signatures targeting a variety of disease processes (neuroinflammation, bioenergetic/metabolic compromise, oxidative stress, synaptic pathology) that can be used as research tools or developed into diagnostic, prognostic, theragnostic or target engagement biomarkers;" and Milestone 9.F, “Initiate studies to develop minimally invasive biomarkers for detection of cerebral amyloidosis, AD and AD-related dementias pathophysiology.”