Senescent immune system cells are potentially among the most harmful of all senescent cells because they spread tissue damage and rapid aging across other body organs and systems. That is what a team of NIA-supported scientists at the University of Minnesota Medical School discovered through research using a mouse model that accelerated immune system aging by hindering DNA repair. The team recently published these findings in Nature. 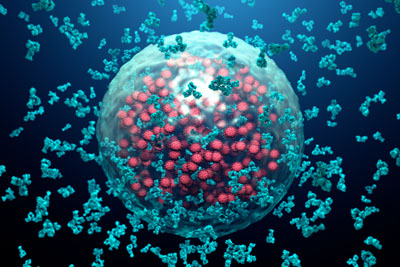 Cellular senescence is defined as a condition in which a cell no longer has the ability to proliferate. These damaged cells resist the body’s usual system of disposal and then linger, excreting chemicals that spread inflammation and damage to neighboring normal cells.

For this study, the team made a cell-specific knockout of the gene Ercc1, which controls a protein crucial for DNA repair. Ercc1 was removed in blood-based young stem cells that normally develop into white blood cells — cells important for immunity — but the gene was expressed normally in all other tissues. This enabled the research team to understand whether senescence in the immune system affects other cells in the body. The engineered mice seemed healthy up until their adulthood (around three months) but then aged rapidly. At age five months, they biologically resembled 2-year-old mice, which is approximately equivalent to an 80-year-old human.

The prematurely older mice had a host of age-related conditions such as osteoporosis; visual and hearing impairment; and high blood pressure, even though the change was limited to cells of the immune system. The senescent immune system cells also spread age-related damage to other organs and tissues in the body, including the liver, lungs, and kidneys. Without the Ercc1 gene, the mice had lost much of their ability to repair DNA in these immune cells and thus experienced a build-up of inflammation and damage in other tissues.

The scientists saw this rapid aging and spread of damage throughout the body as evidence that senescent immune system cells are potentially among the most dangerous of all senescent cell types in the aging body. Because immune cells circulate throughout the body, when they become senescent, they can easily expose a wider range of organs and tissues to inflammation and other damaging factors, unlike more stationary senescent cells such as those in the skin.

The team also studied and confirmed some mechanisms that contribute to senescence in the immune system. First, they showed that senescent immune cells trigger and drive senescence elsewhere in the body by observing senescence triggered across systems in young mice after transplanting spleen cells from old mice into them. Next, they observed that when immune cells from young healthy mice were transplanted into older mice, senescence was reduced, providing further evidence that old immune cells lose function. The scientists also used the drug rapamycin, which tamps down the inflammatory secretions from senescent cells, to show that reducing senescence improved immune function.

While the field of senescence is still very far from any reliable application for humans, the investigators aim to pursue follow-up efforts to pinpoint a precise type of senolytic — a drug that selectively clears senescent cells from the body — to target reducing immune system senescence as a potential future intervention to aid healthy aging. They hope to conduct additional studies in this realm to find new immune system biomarkers to help gauge which people are at the highest risk for senescence-related tissue damage and faster aging, and thus would be candidates to benefit from senolytic therapies.