By searching thousands of electronic medical records, a team of NIA-funded researchers may have discovered key differences in pathology and clinical characteristics between men and women with Alzheimer’s disease, and also between individuals with and without this disease. The study, published in Nature Communications, demonstrates the potential of a “big data” approach involving advanced computer algorithms. 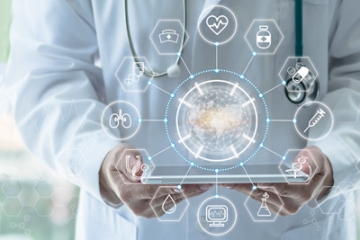 Electronic medical records are generated during visits to health professionals and contain patient clinical data, including details such as age, medical history, medications, and results from labs and diagnostic tests. Before these records are viewed by researchers, all patient data is de-identified — a process that removes any information that could identify a patient. Investigating Alzheimer’s by using data from these records can provide information about the disease’s complexity and identify associations and sex-specific differences in diagnoses, medications, and laboratory test results. The research team — from the University of California, San Francisco (UCSF); Icahn School of Medicine at Mount Sinai, New York; and University of Minnesota Medical School, Minneapolis — used a big data approach known as integrative deep phenotyping to help map out and analyze the electronic medical records of 44,288 people.

Alzheimer’s is a complex condition that may be linked to several traits, risk factors, and other disorders. However, assessing the validity of these connections has been difficult. For instance, while it is known that twice as many women develop Alzheimer’s as men, attempts to determine exactly why have produced mixed results. In this study, the researchers tapped into the wealth of information provided by electronic medical records. This enabled them to search for connections in a systematic and scientifically unbiased manner.

To do this, the researchers first fed an advanced data-mapping computer algorithm all the diagnosis information from the UCSF electronic medical record data set. The algorithm then displayed patient data as clusters on a graph with similar patients’ data falling closer together. Remarkably, data from people with Alzheimer’s showed a different pattern of clustering than those without the disease. Similar results were seen when they used data from Mount Sinai’s electronic medical records. The results supported and validated the idea that this big data approach could be used to visualize and detect disease connections.

Next, the researchers used a different algorithm to search for connections between co-occurrence of different medical conditions, prescribed medications, and lab tests. Using this approach, they found several differences in data from people with Alzheimer’s. For example, in agreement with previous studies, people with Alzheimer’s were more likely than others to be diagnosed with hypertension, diabetes mellitus, anemia, vascular pathology, osteoporosis, or urinary tract infections. Researchers also found differences between men and women with Alzheimer’s. Namely, men appeared more likely to be diagnosed with neurological, sensory, and behavioral disorders. In contrast, women had more frequent diagnoses of arthritis, bone fractures, atrial fibrillations, and accidents.

Overall, the results support the idea that studying electronic medical records may not only help scientists assess patterns and validity of Alzheimer’s associations but also discover new ones. Ultimately, this may help researchers gain a clearer picture of the forces behind this very complex disease.