Massage has long been used to treat sore muscles and relieve stress. Recent studies have shown that these “mechanotherapies” can also improve muscle healing. Applying mechanical forces to injured tissue can aid regeneration and improve muscle function. However, the process underlying these benefits isn’t well understood. 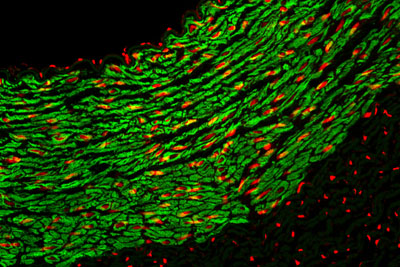 A team led by Dr. David Mooney of Harvard University set out to study how massage may speed muscle healing. Earlier work from the group showed that mechanotherapy doubled the rate of muscle regeneration and reduced tissue scarring in injured mice. Their new study was funded by several NIH institutes. Results were published in Science Translational Medicine on October 6, 2021.

The team developed a robotic device to precisely control the force applied to a mouse’s injured leg muscles. The device used a force sensor covered with soft silicone. An ultrasound above the muscle measured tissue strain from the repeated compressions. The team applied the mechanotherapy to the injured mice each day over 14 days. Three different force levels were tested.

They found that the treatment significantly reduced damaged muscle fibers and scar tissue compared to untreated mice. Contraction strength continued to improve throughout treatment until the treated muscle performed better than uninjured muscle. Improvements were similar across all force levels.

The researchers next explored why the robotic compression helped muscle repair. They theorized the treatment might affect the body’s inflammatory response after injury. They thus analyzed a broad range of proteins, called cytokines and chemokines, involved in inflammation. These play an important role in repairing injured tissue.

They found reduced levels of most inflammatory factors after the third day of mechanotherapy. Further analyses revealed substantial reductions in a set of cytokines involved in attracting and activating immune cells called neutrophils, which are key players in inflammation. The long-term presence of neutrophils is thought to impair muscle regeneration.

The team then tested the theory that mechanotherapy helped clear cytokines and neutrophils from injured tissue. Injecting fluorescent molecules into the tissue revealed greater spread after treatment, supporting this idea.

The results show that mechanotherapy substantially improves recovery of severely injured muscles in mice. This improvement is likely due to the rapid clearance of neutrophils and inflammatory factors, which impede healing.

“This research has revealed a previously unknown type of interplay between mechanobiology and immunology that may be critical for muscle tissue healing,” Mooney says. “It’s a testament to how crucial it is to consider both physical and biological elements when studying and working to improve human health.”

The team aims to validate the benefits of mechanotherapy in larger animals and eventually people.