Adding to other studies looking to the visual system, researchers peering into postmortem eye tissue have identified molecular and cellular changes that point toward possible development of a noninvasive exam for the early screening and monitoring of Alzheimer’s disease. 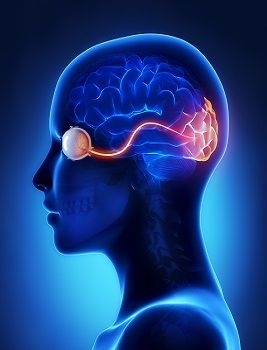 The NIH-funded research, published in Acta Neuropathologica, describes three Alzheimer’s-related processes occurring in the retina, the light-sensitive tissue in the back of the eye: 1) loss of pericytes, cells that regulate blood flow in tiny vessels and help form the blood-retina barrier, which protects the retina from harmful substances entering through the bloodstream; 2) reduced signaling by platelet-derived growth factor receptor-β (PDGFRβ), a protein that provides instructions for tissue maintenance and repair; and 3) accumulation of amyloid deposits in the retinal pericytes and blood vessels. The scientists, from Cedars-Sinai Medical Center, Los Angeles, also mapped these changes to specific regions and layers of the retina.

The researchers noted that several other diseases affecting blood vessels in the retina, such as diabetic retinopathy and age-related macular degeneration, are characterized by a similar degradation of the blood-retina barrier. Discovery of the specific cellular and molecular changes related to this degradation could shed light on common aspects of Alzheimer’s and retinal disease processes. In addition, insights from this study could contribute to the use of retinal imaging to screen for and monitor Alzheimer’s in a way that is less expensive and less invasive than current neuroimaging methods.