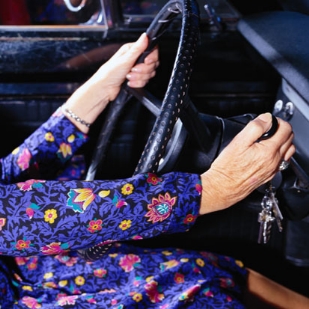 For many older people, no longer being able to drive a car is one of the most devastating experiences associated with growing old. It can mean loss of independence and is often accompanied by loss of self-esteem and social isolation.

“The safety of older drivers and others with whom they share the road is an important public health concern,” said Dr. Richard Suzman, director of the NIA’s Division of Behavioral and Social Research (DBSR), which funds a significant amount of research about aging and driving. “To better understand and address this issue, the NIA has supported a variety of studies, ranging from a focus on the mechanisms of age-related decline in driving ability to possible interventions for maintaining key skills necessary for driving and safety.”

One approach involves research into “useful field of view” (UFOV), a concept that has led to the development of special testing and training programs to help older people retain or regain their driving skills. The story begins in the 1960s, with early research on driving safety.

The number of older drivers on the road is increasing rapidly. Data from the National Highway Traffic Safety Administration (NHTSA) indicate that drivers ages 65 and older made up 15 percent of licensed drivers in 2006, up from 7 percent in 1986. This proportion will likely increase, as the number of Americans 65 and up is expected to double in the next 25 years.

During the 1970s, research shifted to determining the factors behind a loss of driving skills. Over time, several factors that affect driver safety emerged, including cardiovascular disease; disorders affecting muscles, joints, tendons, ligaments, and nerves; and the use of certain medications. However, visual acuity, loss of visual field, and cognitive function seemed to have the biggest impact on driver performance.

Despite these findings, researchers could not show a tight correlation between vision or cognitive function of older drivers and involvement in automobile accidents. As Dr. Karlene Ball, Dr. Cynthia Owsley, and their colleagues at the University of Alabama at Birmingham later pointed out, part of the problem was that most scientists were using separate measures to test the impact of vision alone or cognitive function alone on driver safety. This approach did not account for the interaction of visual and cognitive performance required to handle the numerous distractions encountered in driving.

During the 1980s, the research focus shifted again. Not only did scientists want to identify factors that could reduce older drivers’ safety, they also wanted to explore interventions to remedy a decline in driving skills.

“Driving is a complex task,” said Dr. Jonathan King, who oversees DBSR’s driving research portfolio. “Drivers must not only focus on the field of view directly in front of them, but must also be able to monitor objects and movement in their peripheral vision and identify possible threats. They must be able to discriminate simultaneous informational stimuli, such as stop signs, school zones, pedestrian right of ways, merge lanes, unprotected left turns, and cars in the next lane.”

For the most part, yes. NHTSA research has shown that drivers over age 65 are more likely to use seat belts and are less likely to drive under the influence of alcohol than younger drivers. Other research has proven that age alone is a poor indicator of driving performance. However, older drivers do show an increased risk for traffic accidents per miles driven.

Dr. King added, “They must be able to judge the speed of their own vehicles as well as that of others, including merging traffic. They must be able to make accurate judgment calls, such as the time required to pass safely, the timing of a light, safe following distance, and the safety of making a turn into an oncoming lane.”

Research conducted by Drs. Ball, Owsley, and colleagues, funded in part by DBSR, delved into these issues by focusing on UFOV, the window of attention within which an individual can rapidly be alerted to visual stimuli. UFOV testing measures a driver’s ability to detect, localize, and identify “suprathreshold” targets in complex displays.

A suprathreshold target is something located in the peripheral field of vision that would not normally draw a driver’s attention unless it poses a possible hazard. As such, the UFOV depends on both vision and cognition.

UFOV research was bolstered in 1987 when Congress passed the Surface Transportation Assistance Act, calling for an investigation of problems that affect older drivers’ safety and mobility and possible solutions. A 1989 report from the National Academies of Science Transportation Research Board suggested ways to advance this important research. Partially in response to this directive, the National Institutes of Health (NIH) established a new initiative—Human Factors in Aging. Drs. Ball, Owsley, and colleagues were among the first investigators to receive funding.

Drs. Ball, Owsley, and colleagues found that educational interventions can be effective in changing self-perception and attitudes of older drivers with a decline in visual function or UFOV. They found that education on the importance of UFOV led to voluntary changes in driving habits to avoid more challenging driving situations and to practice safety-enhancing, self-regulatory practices. These changes in driving habits may help reduce the incidence of traffic accidents and fatalities in older drivers.

This research team reported that older adults were more likely to have a smaller UFOV than younger adults. However, loss or maintenance of UFOV is highly individual, and many older people maintain a good UFOV well into their 80s.

By 1991, the team had documented the fact that impaired visual function, mental status, or a combination of both can result in a decline in UFOV. By 1998, they had shown that older drivers with a 40 percent or more impairment of UFOV were about twice as likely to be in an auto accident in the next 3 years compared with older drivers who were not similarly impaired.

Dr. Ball’s team also showed that older drivers with a limited UFOV can benefit from targeted “speed-of-processing” training. Drivers in these training studies improved their UFOV by 30 to 60 percent by participating in 30 minutes of training each day for 5 days—and the training led to improved driving skills for as long as 18 months. Since some drivers do not retain training benefits for this long, booster courses may be needed.

Collaboration among the NIA, researchers, and private companies has led to the use of UFOV testing and training to improve the safety and maintain the mobility of older drivers:

“The NIA’s long-term investment in UFOV research is providing a way to address individual differences in driving skills and abilities,” said Dr. King. “The UFOV® test and associated training programs may be one way to address those differences in place of age-based restrictions on driving.”

The benefits of UFOV testing and training may even extend beyond driving ability. In a recent NIA-supported study, older men and women reported that UFOV speed-of-processing training was associated with improved health-related quality of life and less depression. If UFOV programs are further validated, this investment may touch the lives of older Americans across the country as one way to remain active and independent as they age.