More than 1 million women in the United States experience menopause each year. Still, little is known about the health effects of this natural biological occurrence. NIA-funded researchers are working to better understand what causes menopause symptoms and how women from diverse racial and ethnic backgrounds can benefit from that scientific knowledge to live healthier lives — before, during, and after menopause. 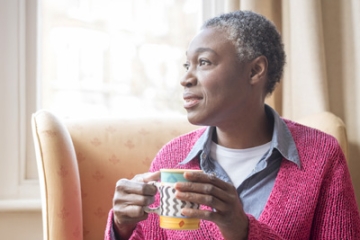 Most people have likely heard of menopause even if they haven’t experienced it themselves, but it’s commonly misunderstood. So, what is menopause, exactly? It marks the point in time 12 months after a woman’s last period. The years leading up to when a woman stops menstruating are collectively called the menopausal transition, also known as perimenopause. Hormone levels vary greatly during this transitional time, and women may experience a range of unpleasant symptoms, such as hot flashes and sleep problems. This transition is a major midlife event in women’s lives, usually beginning between ages 45 and 55 and lasting for about seven years.

NIA-funded scientists are working to answer the many questions about the health impacts of menopause. As just a few examples, what symptoms and biological changes are due to natural aging in women, and which are directly related to menopause? For both men and women, midlife often comes with increased risk factors and declines in physical health and function, which in turn can affect health status later in life. What role does menopause play in those declines for women? What are the implications of menopause symptoms such as hot flashes and sleep problems, and midlife changes for a woman’s health as she ages? Are hormone treatments safe and effective, and what are other possible treatments for menopause symptoms?

For more than 25 years, the NIH-supported Study of Women’s Health Across the Nation (SWAN) has generated groundbreaking research findings on women’s health matters, including menopause. SWAN investigators study the importance of physical, biological, psychological, and social changes that occur in women during midlife, and the impact on their health. Because the investigators recruit women from different racial and ethnic groups, including African American, Chinese, Hispanic, Japanese, and white, the resulting data provide critical insights for diverse groups of women. Study data has revealed changes associated with the menopausal transition and helped scientists identify racial and ethnic differences in women’s experiences. At the beginning of the study, SWAN enrolled 3,302 women between 42 to 52 years of age. The researchers gathered data at the study start and in yearly follow-up visits. The study produced an extensive collection of biospecimens and data, which are housed in the NIA AgingResearchBiobank.

“The longitudinal nature of SWAN has enabled it to distinguish some of the effects of midlife aging versus changes in health due to the menopausal transition — in essence, the effects of chronological age versus those of ovarian aging,” said Chhanda Dutta, Ph.D., with NIA.

For example, changes in cardiovascular health were more influenced by the menopausal transition, whereas increases in high blood pressure and Body Mass Index (BMI) were more attributable to chronological aging.

There is also interplay among the different changes. Using data from SWAN, recent studies looked at cognitive and cardiovascular changes associated with women in midlife. The researchers found that vascular risk factors, which include diabetes, high blood sugar, excess belly fat, high blood pressure, and high cholesterol, were related to the rate of decline in cognitive processing, or thinking speed, observed from the sixth through seventh decades of life.

In another study, vascular health seemed to be tied to menstrual cycle length during the menopausal transition. Research from the Daily Hormone Study (DHS), part of SWAN, found that an increased cycle length starting five years before a woman’s final period was associated with thicker arterial walls later in life. Cycle length, which is linked to hormone levels, could be used as an early indicator for postmenopausal vascular risk in women.

Menopause itself may contribute to structural and functional vascular changes. Within one year of the final menstrual period, arterial stiffness significantly increased — beyond what would be expected from aging and risk factors alone.

Scientists enroll research participants from diverse backgrounds, taking into account race, gender, ethnicity, age, and other factors. This helps the investigators understand risk factors and health outcomes that may differ across diverse communities. For example, in the SWAN study, increased cardiovascular disease risk during the menopausal transition was associated with worse late midlife cardiovascular health across all racial and ethnic groups studied. However, researchers identified several disparities in the distribution of these cardiovascular changes:

To help learn more about why these disparities exist and how they might be addressed, SWAN researchers are collecting, analyzing, and publishing information about the health and aging of midlife women from diverse communities and racial and ethnic backgrounds.

What about hormone treatments?

Some women want to know if hormones are a good option for treating symptoms of menopause and the level of risk involved. Twenty years ago, findings from a Women’s Health Initiative (WHI) study raised concerns and questions about the safety of hormone therapy. Initially, researchers had examined data from participants who were an average of 10 years past menopause and had high cardiovascular risk. However, more recent research, including further analysis of the WHI data, has found that there may be more benefit and less risk for women during the menopausal transition than was first suggested.

After the WHI study, researchers designed the Kronos Early Estrogen Prevention Study (KEEPS), which includes the NIA-funded KEEPS-Cognitive and Affective sub-study, to better understand the effects of timely menopausal hormone therapy (MHT). By enrolling participants with a lower risk for cardiovascular disease, the study was able to observe the effects of MHT more directly and address concerns about side effects. KEEPS recruited more than 700 women at low cardiovascular risk who were within three years of their last menstrual period to investigate the cardiovascular, cognitive, and mood effects of two forms of MHT — conjugated estrogen and estradiol — both with oral progesterone.

“During the study, there were no major adverse cardiovascular or cognitive events, or differences in incidence of breast cancers among MHT and placebo groups,” said Kejal Kantarci, M.D., a principal investigator in the Department of Radiology at the Mayo Clinic College of Medicine and Science. “This information should provide reassurance to women with low cardiovascular risk who are considering use of hormone treatment to reduce menopausal symptoms.”

“This re-contact with KEEPS participants provides a singular opportunity to assess the long-term risks and benefits of MHT on brain, cognitive, and mood health and on development of Alzheimer’s disease in women who were treated with MHT within three years of menopause, which is considered to be the ‘critical window’ for MHT,” Kantarci said.

While researchers continue to gather evidence on hormone therapy, both the American College of Obstetricians and Gynecologists and the North American Menopause Society provide guidance to clinicians on the use of hormone therapy to treat vasomotor symptoms related to menopause, including identifying the most appropriate dose and formulation that would involve the least risk. The U.S. Preventive Services Task Force does not recommend hormone therapy for the prevention of chronic conditions, such as cardiovascular disease.

Hormone treatment for menopausal symptoms might not be right for everyone. Other studies are investigating nonhormonal treatment options. For example, an effort called Menopause Strategies: Finding Lasting Answers for Symptoms and Health (MsFLASH), funded in part by NIA, helped test multiple nonhormone treatments. In all, researchers completed five clinical trials involving more than 1,300 women in six U.S. cities to test nine interventions to treat hot flashes, sleep problems, and other menopausal symptoms.

Study findings showed that cognitive behavioral therapy for insomnia improved sleep in women with menopausal sleep problems. The therapy sessions, six individual sessions over an eight-week period, covered topics such as strengthening the association between bed and sleep and improving bedtime routines.

To help women learn more about the menopausal symptoms and what they can do, the MsFLASH network developed the My Menoplan website.

Menopause and the brain

Aside from typical aging changes, there is some evidence that menopause on its own may have a connection to brain health. A brain imaging study supported in part by NIA indicated differences in the brain’s structure, connectivity, and energy process before, during, and after the menopausal transition. The study was led by Lisa Mosconi, Ph.D., director of the Weill Cornell Women's Brain Initiative. Findings showed that the brain changes were specific to menopausal ovarian aging rather than chronological aging.

The researchers also looked at the buildup of amyloid plaques, a hallmark of Alzheimer’s, and compared the brains of women and men carrying APOE ε4, which is a genetic variant associated with increased risk for this disease. Perimenopausal and postmenopausal women were found to have more buildup than males and premenopausal women.

Menopause itself may be a dynamic neurological transition. Many menopausal symptoms, including vasomotor and sleep problems, are tied to the nervous system. Associated changes could have implications for dementia risk. Vasomotor symptoms and poor sleep are linked to greater risk of cardiovascular disease. And cardiovascular disease, as well as white matter hyperintensities, are risk factors for Alzheimer’s disease and vascular dementia.

Thurston and team have finished data collection for the first part of MsBrain — MsBrain I — and are processing the data. Though their results pertaining to vasomotor symptoms are not final, the early findings from MsBrain have underscored the importance of sleep to white matter hyperintensities and to connectivity between brain regions in women.

What’s next for MsBrain? MsBrain II, the second part of the study, will invite 160 of the 230 participants back from MsBrain I to repeat assessments.

“We need to understand whether women with more persistent symptoms over midlife show the greatest declines in brain health over time,” Thurston said. “Further, we need to better understand the mechanisms linking menopausal symptom to brain aging.”

Promising links to explore include sex hormones, cardiovascular health, and cellular energy, which are important to brain health.

The momentum continues in this exciting area of research and NIA-funded scientists are investigating the many remaining questions, including menopause associations of cognitive, brain, and cardiovascular health in women at midlife and beyond.

“We still need to understand the long-term health consequences of midlife aging and the menopausal transition in women, including racial and ethnic differences,” Dutta explained. “As we learn more about the long-term health consequences, there is a need for ongoing research on the social and biological factors influencing the menopausal experience so that we can develop better strategies to promote healthy aging for women of all races and ethnicities.”

What can you do?

Menopause is different for all women, but there are actions you can take.