Scientists recently discovered a process by which immune cells can drive aging in the brain, and how to block this pathway to improve memory and maze navigation in older mice. The findings suggest a potential avenue to develop new treatments for cognitive conditions like Alzheimer’s disease. The study, led by researchers from Stanford University, was published in Nature on Jan. 20. 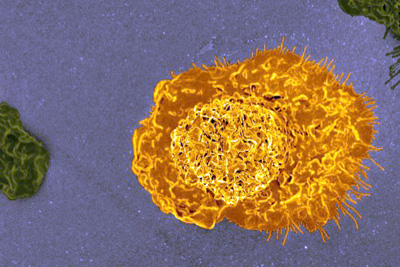 Inflammation is part of the immune system response to infection or injury. But as people age, they may have chronic low-level inflammation, which is linked to age-related diseases and cognitive decline.

Normally, immune cells — including a group of cells called macrophages — create immune responses that protect the brain, such as disposing of abnormal forms of proteins that are tied to neurodegeneration. But as people — and mice — age, immune cells can start encouraging inflammation rather than protecting against it.

A compound called prostaglandin E2 (PGE2) is involved in regulating inflammation. PGE2 levels increase during aging and in neurodegenerative diseases. The researchers wanted to know how PGE2 might affect macrophages and the aging process. When they looked at macrophages from older mice and people older than 65, they found that these vintage immune cells produced more PGE2 than those of younger mice and humans.

By adding PGE2 to macrophages from both older mice and older humans in the lab, the researchers found that when this compound linked up to a receptor on the macrophages’ surface, it changed the way the macrophages’ metabolism worked. Instead of producing energy, the macrophages now stored their fuel. These energy-sapped cells switched from being immune system protectors to actually driving more inflammation.

To test whether blocking the PGE2 pathway could help with cognition, researchers put the mice through several memory and maze tests. They found that older mice in the study — with their more youthful macrophages — performed just as well as younger mice and significantly better than older control mice. The results suggest that maintaining macrophages’ normal metabolism can forestall aging-related cognitive declines in mice. Finding this new pathway that affects how macrophages respond during aging could help researchers look for potential new treatments for aging-related problems with thinking and memory.