Putting exercise to the test in people at risk for Alzheimer's

Can exercise slow or prevent cognitive decline in older people who are at increased risk for Alzheimer’s disease? A new clinical trial led by NIA-supported scientists in collaboration with the YMCA aims to find out whether exercise may be an effective nondrug treatment for staying cognitively fit.

The trial, called EXERT, will enroll 300 people, age 65 to 89, with mild cognitive impairment (MCI), a condition of mild memory problems that often leads to Alzheimer’s dementia. Based on the trial’s results, the researchers hope to develop an evidence-based “prescription” that will tell people the type and frequency of exercise needed to support memory and thinking skills.

“We want to design a real-life program that can be implemented in the community and prescribed by healthcare providers,” said Laura D. Baker, Ph.D., of Wake Forest Baptist Medical Center in Winston-Salem, N.C., who is leading the study with Carl W. Cotman, Ph.D., of the University of California, Irvine.

Laurie Ryan, Ph.D., chief of the Dementias of Aging branch in NIA’s Division of Neuroscience, added, “The EXERT trial builds on previous evidence that associates aerobic physical activity with preservation of cognitive function. It will expand what we know about the benefits of aerobic exercise on memory, executive function, and other thinking abilities, as well as on the brain itself.”

The trial, to take place at 13 U.S. sites, is coordinated by the NIA-supported Alzheimer’s Disease Cooperative Study, a consortium of universities and research centers in the United States and Canada. 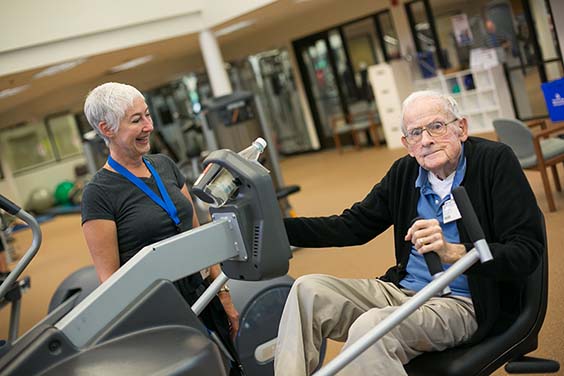 The jury is still out on whether exercise can delay or prevent dementia. Some studies suggest that exercise has such a benefit, but others do not. Clinical trials have been small, and their results can be hard to compare because of differences in the types of people and exercise studied and, in some cases, the trials’ relatively short duration.

Researchers are targeting people with MCI who are generally sedentary. That’s because people who are physically fit may already be at peak brain function and might not show much improvement, Dr. Baker said.

To qualify for the trial, participants may have engaged in casual, low-intensity physical activity but not rigorous exercise. “Light gardening, walking the dog, and the like, that’s OK,” she explained.

All trial participants will receive a free membership at a participating YMCA, where they will work closely with a personal trainer for 1 year, then exercise on their own for an additional 6 months. The trainers will ensure participants’ physical safety and encourage them to stick with the EXERT exercise program.

In addition, they will undergo tests and procedures at the beginning of the trial and then every 6 months, including:

Walking fitness tests and sleep studies are also part of the trial. Researchers will examine whether exercise’s effects on walking and sleep might explain its effects on memory and thinking abilities.

A window of opportunity

Previous research has shown that Alzheimer’s disease begins in the brain years before symptoms appear. Its slow progression offers a chance to stall or even prevent full-blown dementia in people who are most likely to develop debilitating symptoms such as trouble with memory, planning, and organization. Many Alzheimer’s clinical trials are testing new drugs, while others are testing nondrug interventions like exercise and diet.

Investigators hypothesize that to make a difference in brain structure and function—and, in turn, memory and other cognitive functions—exercise must be physically challenging and sustained. What specific “dose” is effective remains to be seen. (Current federal guidelines recommend that adults engage in at least 150 minutes per week of moderate physical activity, 75 minutes of vigorous activity, or a combination of the two.)

Years of animal and human observational studies—in which researchers observed behavior but did not influence or change it—suggest the possible benefits of exercise for the brain.

He added, “In animals, remarkable changes happen in the brain after exercise. Brain cells are less vulnerable to injury and toxicity. There’s also growth in connections between cells and an increase in growth factors in the brain.”

Studies in mice have also shown that exercise leads to an increase in new neurons, larger and healthier existing neurons, and new blood vessels—which together result in an increase in the size of the hippocampus, a brain region important for memory and learning.

Observational studies in cognitively normal humans have shown that those who exercise have a lower risk of cognitive decline than those who do not. Effects of exercise on the brain range from increased hippocampal volume (or a reduced shrinkage rate) to improved energy use. Exercise has also been associated with fewer Alzheimer’s plaques and tangles in the brain and better performance on certain cognitive tests.

In EXERT, Dr. Baker said, “we’ll be looking at specific regions of the brain that support memory and thinking and also regions first affected by Alzheimer’s disease.”

Dr. Baker and her research team laid promising groundwork for EXERT with PACE-2, or Piedmont Aging, Cognition, and Exercise, Study 2. In PACE-2, 65 volunteers with MCI and prediabetes, age 50 to 89, were randomly assigned to do either high-intensity aerobic exercise or stretching and balance exercise at local YMCAs. The first group exercised hard enough to get to 70 to 80 percent of their maximum heart rate. The second group kept their heart rate at 35 percent of maximum or lower. All participants worked out 45 minutes per day, 4 days per week, for 6 months.

Researchers found that the aerobic group had better executive function—the ability to plan and organize—than the stretching/balance group, but not better short-term memory. Blood flow increased in brain regions affected by aging and Alzheimer’s disease. Levels of the protein tau in cerebrospinal fluid, which normally rise with age and are associated with cognitive decline, fell in participants age 70 and older.

Why did executive function improve but not memory? According to Dr. Baker, it’s possible that people need to exercise for longer than 6 months to see memory benefits, or that the cognitive tests were not sensitive enough to detect changes. ”In EXERT, the tests are harder and more sensitive to changes in episodic memory,” she noted.

Dr. Baker added, “We are excited to get this trial up and running, so to speak, to contribute to the effort to find effective therapies, including nondrug treatments, that may help delay or even prevent cognitive decline and dementia.”

For more information about EXERT, visit www.exertstudy.org, or contact the Alzheimer's Disease Cooperative Study at brainlink@ucsd.edu.