Studies estimate that more than 5 million people in the U.S. are living with Alzheimer’s disease. That number is expected to rise as the population ages.

The brains of people with Alzheimer’s disease have two distinct hallmarks. These are abnormal clumps called amyloid plaques and tangled bundles of fibers called neurofibrillary, or tau, tangles. These changes disrupt nerve cells and eventually cause them to die. The loss of brain tissue destroys memory and thinking skills and, eventually, the ability to carry out tasks of daily living.

In order to better understand whether tau tangles and amyloid plaques may predict the development of Alzheimer’s, researchers need to be able to track tau and amyloid in the brain as disease develops. 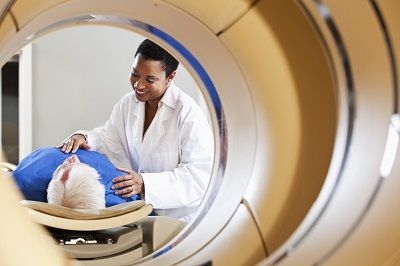 Recently, scientists have developed molecules that allow them to use PET imaging to measure the levels of amyloid plaques and tau tangles in living brain tissue. In a new study, a team led by Drs. Renaud La Joie and Gil Rabinovici from the University of California, San Francisco, used these molecules, called tracers, to see if amyloid or tau levels in the brain could predict the loss of brain matter over time.

The study included 32 people with early-stage Alzheimer’s disease. All participants underwent PET imaging to assess the levels and locations of amyloid and tau at the beginning of the study. They also had MRI scans of the brain to calculate brain volume. About 15 months later, they underwent a second MRI scan to measure loss of brain tissue.

The research was funded in part by NIH’s National Institute on Aging (NIA). Results were published on January 1, 2020, in Science Translational Medicine.

People with higher levels of tau seen by PET at the start of the study had a greater loss of brain matter by the second MRI scan. In contrast, levels of amyloid measured at the start of the study were not strongly associated with subsequent brain changes. The researchers estimated that the tau patterns measured by PET could explain about 40% of the difference in future brain degeneration, compared to only 3% for amyloid PET.

The participants in the study were relatively young for people with Alzheimer’s disease: 63% were under the age of 65 when they enrolled. The younger patients had higher levels of tau in the brain overall and experienced more rapid loss of brain tissue.

“The match between the spread of tau and what happ­ened to the brain in the following year was really striking,” says Rabinovici. “Tau PET imaging predicted not only how much atrophy we would see, but also where it would happen. These predictions were much more powerful than anything we’ve been able to do with other imaging tools and add to evidence that tau is a major driver of the disease.”

PET imaging of tau may be helpful for future clinical trials of drugs targeting the tangles. Such imaging could potentially help detect early response — or lack of response — to new treatments. More work is needed to understand other factors that can help predict loss of brain tissue in Alzheimer’s disease.