Previous research has led to findings that support links between a positive mental outlook and physical health benefits such as lower blood pressure, less heart disease, and healthier blood sugar levels. In a recent study of mood changes in older adults, scientists also have discovered that healthy brain function may result in maintaining a positive outlook. 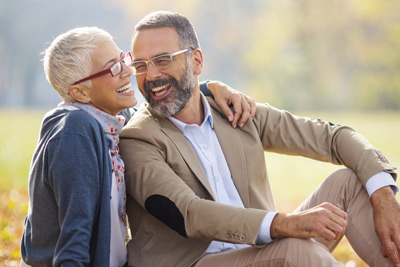 For this study, which was funded in part by NIA and published in the American Journal of Geriatric Psychiatry in September 2020, scientists proposed a potential neurobiological connection between an older adult’s mood with changes, over a period of time, in white brain matter and cognitive ability. White matter is where information is transmitted from one brain region to another. As we age, changes can occur in the white matter that may lead to thinking, walking, and balance problems.

Research participants included 716 community-dwelling adults who were assessed to have normal cognitive and neurological function. Mood was measured using the Geriatric Depression Scale (GDS). The neuropsychological assessment included tests of executive function, memory, and processing speed (the time it takes to comprehend information and respond). A subset of 327 participants also underwent brain magnetic resonance imaging (MRI) within six months of completing the GDS and neuropsychological assessments.

The investigators found that mood improved with increasing age until around the early 70s, at which point the positive effect of age on mood plateaued, and eventually reversed. Stable white matter integrity, along with stable executive function and processing speed, appeared to protect against this reversal of positive mood.

Because the study was observational, these findings cannot be interpreted to show causation. Further research is needed to determine whether the brain-mood relationships are bidirectional. Another caveat is that the participants were mostly white and highly educated. Observed relationships between mood, age, white matter integrity, and cognition need to be evaluated in racially and educationally diverse groups. The researchers also suggest that future studies of the links between brain health, cognition, and mood should be large-scale, longitudinal, and use methods to allow capture of the full range of neurodevelopment. Results of such studies could inform interventions across a variety of neurodegenerative and neuropsychiatric conditions.

This research was supported in part by NIH grant R01AG032289.