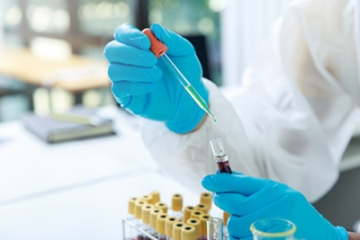 Extracellular vesicles are tiny sacs released by cells in the body that transport “cargo molecules” between cells and communicate information. Extracellular vesicles originating from neurons have proteins such as alpha-synuclein, beta-amyloid, phosphorylated tau, and an insulin-signaling protein called Insulin Receptor Substrate 1 (IRS-1). These proteins are biomarkers, measurable indicators of body processes that can help doctors diagnose diseases. Alpha-synuclein buildup in the brain is a key pathological hallmark of Parkinson’s and may also contribute to dementia. Buildups of beta-amyloid and phosphorylated tau are typically associated with brain changes in Alzheimer’s disease but are also present in Parkinson’s. Additionally, insulin resistance — an impaired response to the hormone insulin, resulting in increased blood sugar — is associated with Parkinson’s. Extracellular vesicles and their cargo molecules can be isolated and measured in blood to identify potential Parkinson’s biomarkers.

NIA researchers collaborated with scientists in New Zealand and France to isolate neuronal extracellular vesicles in blood samples from more than 200 people. The samples came from participants in the New Zealand Parkinson’s Progression Programme who had Parkinson’s, either with normal cognition or with cognitive impairment (mild cognitive impairment or dementia, excluding Lewy body dementia), and 49 people without Parkinson’s. The researchers measured the levels of alpha-synuclein, beta-amyloid, phosphorylated tau, and active IRS-1 proteins in each sample.

These activities relate to NIH’s Alzheimer’s and Related Dementias Research Implementation Milestone 2.H, “Continue to support cross-disciplinary research to discover and understand disease mechanisms that are common between AD and other neurodegenerative disorders including rare disorders and leverage these for therapy development.”