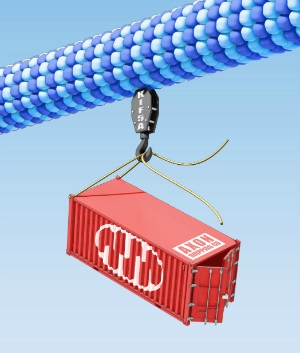 Kinesin family member 5A (KIF5A), a gene previously linked to two rare neurodegenerative disorders, has been definitively connected to amyotrophic lateral sclerosis (ALS) by an international team from several of the world’s top ALS research labs. The findings identify how mutations in KIF5A disrupt transport of key proteins up and down long, threadlike axons that connect nerve cells between the brain and the spine, eventually leading to the neuromuscular symptoms of ALS.

It took a comprehensive, collaborative effort to analyze a massive amount of genetic data to pin down KIF5A as a suspect for ALS, also known as Lou Gehrig’s disease. To zero in on KIF5A, the NIH team performed a large-scale genome-wide association study, while the University of Massachusetts team concentrated on analyzing rare variants in next generation sequence data. Over 125,000 samples were used in this study, making it by far the largest such study of ALS performed to date.

“The extraordinary teamwork that went into this study underlines the value of global, collaborative science as we seek to better understand devastating diseases like ALS,” said Richard J. Hodes, M.D., director of NIA. “These types of collaborative data collection and analysis are important in identifying the pathways underlying disease and in developing approaches to treatment and prevention.”

KIF5A regulates part of the kinesin family of proteins that serve as tiny intracellular motors. Problems with these proteins are connected to ALS, Parkinson’s disease and Alzheimer’s disease. KIF5A mutations were previously known to be connected to two other rare neurodegenerative diseases with muscle weakening, stiffening and spasticity symptoms similar to ALS: hereditary spastic paraplegia type 10 (SPG10) and Charcot-Marie-Tooth Type 2 (CMT2.) Scientists suspected KIF5A might be associated with ALS but lacked definite proof until now.

“Axons extend from the brain to the bottom of the spine, forming some of the longest single cellular pathways in the body,” said Traynor. “KIF5A helps to move key proteins and organelles – specialized parts of cells -- up and down that axonal transport system, controlling the engines for the nervous system’s long-range cargo trucks. This mutation disrupts that system, causing the symptoms we see with ALS.”

Traynor cautioned that the discovery, while exciting, still leaves much more work to be done “While this is unlikely to be a very common genetic cause for ALS, it identifies important new directions to explore possible future gene therapies,” he said.

According to Traynor, next steps for the project include further study of the frequency and location of mutations within KIF5A and determining what cargos are being disrupted. He and his team hope this will help reveal what aspect of axonal transport is essential to maintain the cell.

About the National Institute on Aging: The NIA leads the federal government effort conducting and supporting research on aging and the health and well-being of older people. It provides information on age-related cognitive change and neurodegenerative disease specifically at its Alzheimer's Disease Education and Referral (ADEAR) Center.

About NINDS: NINDS is the nation’s leading funder of research on the brain and nervous system. The mission of NINDS is to seek fundamental knowledge about the brain and nervous system and to use that knowledge to reduce the burden of neurological disease. For more information on ALS, visit NINDS' Amyotrophic Lateral Sclerosis (ALS) Information Page.

About the National Institutes of Health: NIH, the nation's medical research agency, includes 27 institutes and centers and is a component of the U.S. Department of Health and Human Services. NIH is the primary federal agency conducting and supporting basic, clinical, and translational medical research, and is investigating the causes, treatments, and cures for both common and rare diseases. For more information about NIH and its programs visit the NIH website.