Many older adults want to live at home independently as they age. Sometimes all they need is a little help from their family and friends—and the right technology. A new initiative led by the National Institutes of Health (NIH) aims to help seniors age in place by developing a research platform to study the use of health-related in-home sensors and other technologies. 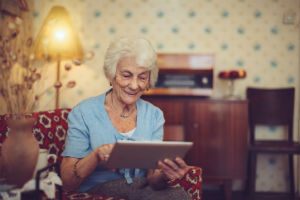 CART—Collaborative Aging (in Place) Research Using Technology—unites NIH, academic, and industry experts to develop and test unobtrusive tools that record and track real-time changes in older adults’ health status and activities. Launched in October 2016, the $7 million, 4-year project will take place in more than 200 homes in rural and urban communities across the United States.

“This project will provide a systematic way of investigating technology that may enable older people to remain independent and avoid hospitalizations and transitions into care facilities,” said Nina Silverberg, Ph.D., of the National Institute on Aging (NIA), which leads the project.

“We want to know if existing and other devices now being developed can identify health issues and other problems—such as depression, risks for falls, or leaving the stove on—that may lead to a loss of independence,” she added.

CART will advance a research platform to develop and test in-home activity sensors and other technologies that detect changes in key health- and independence-related activities, such as sleep, mobility, body composition, and driving. Interaction with computers, phones, and other devices will be used to assess aspects of cognition and socialization.

“The idea is to capture subtle changes that may signal cognitive or other problems that endanger a person’s safety and independence,” said NIA program officer Partha Bhattacharyya, Ph.D.

“CART will test how we might safely and efficiently collect these health data, share it with caregivers and healthcare providers, and possibly speed the delivery of health interventions while maintaining the privacy of volunteers,” he said. “We will not only test products currently available, but also put into place a research infrastructure to advance the development of emerging technologies.”

In the first phase of CART, researchers led by Jeffrey Kaye, M.D., of Oregon Health & Science University (OHSU), Portland, will test technology for collecting data, such as sensors and activity trackers, in more than 200 homes. The ultimate aim is to build an infrastructure that will support research on a large scale, on the order of thousands of homes. If this phase 1 project is successful, investigators could apply, in the future, for funds from multiple sources to continue the infrastructure in a phase 2, which would allow testing of innovative new technologies to help older adults remain independent for longer.

Leveraging existing infrastructure developed by ORCATECH, the research team plans to start testing its platform in older adults’ homes this year. Participants will include residents in low-income housing in Portland, veterans in the rural Pacific Northwest, African Americans in Chicago, and Latinos in Miami.

“It’s a broad infrastructure designed to be dynamic in response to rapidly changing technology, incorporating new measures and devices as they become available,” said Dr. Silverberg. “We want companies to bring new technology to the market, but with scientific evidence to back up their product claims. By testing the products in larger groups of diverse volunteers, CART data will show what works and for whom it works, and what might merit further study.”

Passive, in-home monitoring technology isn’t new. But barriers to adoption such as cost, little evidence of effectiveness, and concerns about privacy have made its adoption slow to catch on, Dr. Kaye said.

Data will flow wirelessly 24/7, providing a constant flow of objective information about activity, sleep, mobility, walking, social interaction, and general health. “This becomes a terrific window on whether a person is successfully aging in place,” said Dr. Kaye.

A weekly email survey of participants will address health factors that are difficult to monitor remotely, such as pain level, mood, changes in medications, and hospital visits.

CART’s roots go back to 2011, when Dr. Kaye teamed with R. Paul Crawford, Ph.D., then senior research scientist at Intel Labs; the Foundation for the National Institutes of Health; and others to launch the Senior Independent Living Research Network Initiative, which developed a proof-of-concept research environment and infrastructure.

At ORCATECH, Dr. Kaye and researchers continued to develop and implement technologies that unobtrusively collect data. The CART initiative developed out of recommendations from a 2014 National Heart, Lung, and Blood Institute workshop, in which NIA also participated, Technologies for Improving the Independence of Older Adults and Individuals with Disabilities, led by the Computing Community Consortium and funded by the National Science Foundation.

NIA has high hopes for CART. “We think this will be transformative for the whole field,” said Dr. Silverberg. “It may even help clinical trials measure, in real time, things doctors might ask about in a visit every 6 months or every year. We hope it will help detect and prevent important health issues.”

Dr. Kaye talks about aging-in-place technology and its application in a volunteer’s home.