The National Institutes of Health, 10 biopharmaceutical companies and several nonprofit organizations today launched an unprecedented partnership to transform the current model for identifying and validating the most promising biological targets of disease for new diagnostics and drug development. 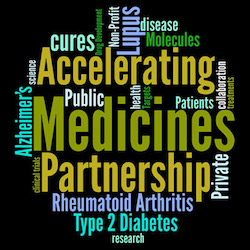 The Accelerating Medicines Partnership (AMP) aims to distinguish biological targets of disease most likely to respond to new therapies and characterize biological indicators of disease, known as biomarkers. Through the Foundation for the NIH (FNIH), AMP partners will invest more than $230 million over five years in the first projects, which focus on Alzheimer’s disease, type 2 diabetes, and the autoimmune disorders rheumatoid arthritis and systemic lupus erythematosus (lupus).

A critical and groundbreaking element of the partnership is the agreement that the data and analyses generated will be made publicly available to the broad biomedical community. The three- to five-year, milestone-driven pilot projects in these disease areas could set the stage for broadening AMP to other diseases and conditions.

“Patients and their caregivers are relying on science to find better and faster ways to detect and treat disease and improve their quality of life,” said NIH Director Francis S. Collins, M.D., Ph.D. “Currently, we are investing a great deal of money and time in avenues with high failure rates, while patients and their families wait. All sectors of the biomedical enterprise agree that new approaches are sorely needed.”

“The good news is that recent dramatic advances in basic research are opening new windows of opportunity for therapeutics,” continued Dr. Collins. “But this challenge is beyond the scope of any one of us and it’s time to work together in new ways to increase our collective odds of success. We believe this partnership is an important first step and represents the most sweeping effort to date to tackle this vital issue.”

As a result of technological revolutions in genomics, imaging, and more, researchers have been able to identify many changes in genes, proteins, and other molecules that predispose to disease and influence disease progression. While researchers have identified thousands of such biological changes that hold promise as biomarkers and drug targets, only a small number have been pursued. Choosing the wrong target can result in failures late in the development process, costing time, money, and ultimately, lives. Currently, developing a drug from early discovery through U.S. Food and Drug Administration approval takes well over a decade and has a failure rate of more than 95 percent. As a consequence, each success costs more than $1 billion.

“The AMP rallies scientific key players of the innovation ecosystem in a more unified way to address one of the key challenges to Biopharma drug discovery and development,” said Mikael Dolsten, M.D., Ph.D., President of Worldwide Research and Development at Pfizer. “This type of novel collaboration will leverage the strengths of both industry and NIH to ensure we expedite translation of scientific knowledge into next generation therapies to address the urgent needs of Alzheimer’s, diabetes and RA/lupus patients.”

AMP has been more than two years in the making, with intense interactions between scientists in the public and private sectors, progressive refinement of the goals, strategy development support from the Boston Consulting Group, and scientific project and partnership management by the FNIH. Through this effort, AMP partners have developed research plans and are sharing costs, expertise, and resources in an integrated governance structure that enables the best informed contributions to science from all participants.

The research highlights for each disease area are:

Highly collaborative steering committees with representation from public- and private-sector partners will be established for each disease area to oversee the research plans. The steering committees will be managed by FNIH under the direction of an AMP executive committee comprised of leaders from NIH, industry, the FDA, and patient advocacy organizations.

More information about the program and the disease research plans can be found here: https://www.nih.gov/research-training/accelerating-medicines-partnership-amp.

About the Foundation for the National Institutes of Health (FNIH): FNIH creates and manages alliances with public and private institutions in support of the mission of the NIH, the world’s premier medical research agency. The Foundation, also known as the FNIH, works with its partners to accelerate key issues of scientific study and strategies against diseases and health concerns in the United States and across the globe. The FNIH organizes and administers research projects; supports education and training of new researchers; organizes educational events and symposia; and administers a series of endowments supporting a wide range of health issues. Established by Congress in 1996, the FNIH is a not-for-profit 501(c)(3) charitable organization. For additional information about the FNIH, please visit http://www.fnih.org.

The Office of the Director, the central office at NIH, is responsible for setting policy for NIH, which includes 27 Institutes and Centers. This involves planning, managing, and coordinating the programs and activities of all NIH components. The Office of the Director also includes program offices which are responsible for stimulating specific areas of research throughout NIH. Additional information is available at http://www.nih.gov/icd/od.

About the National Institutes of Health: NIH, the nation's medical research agency, includes 27 Institutes and Centers and is a component of the U.S. Department of Health and Human Services. NIH is the primary federal agency conducting and supporting basic, clinical and translational medical research, and is investigating the causes, treatments and cures for both common and rare diseases. For more information about NIH and its programs, visit www.nih.gov.