Researchers in NIA’s Clinical and Translational Neuroscience Section in the Laboratory of Behavioral Neuroscience are leading an innovative new study to determine whether medicines currently used to treat conditions other than dementia can help prevent or treat Alzheimer’s disease. Plans for the Drug Repurposing for Effective Alzheimer’s Medicines (DREAM) study were published recently in Alzheimer’s and Dementia: Translational Research and Clinical Interventions. 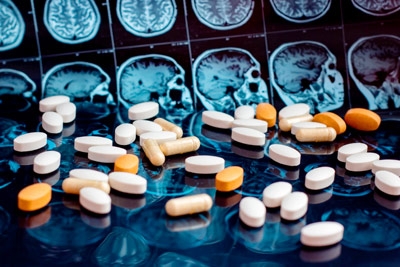 The NIA team, led by Madhav Thambisetty, M.D., Ph.D, collaborated with researchers at Harvard Medical School, Rutgers University, and Johns Hopkins University School of Medicine to design a new approach that would be an alternative to traditional drug discovery. This method focuses the search on drugs that have already been shown safe and effective for other conditions. And, instead of beginning the search for treatments by testing compounds in lab animals for effectiveness, the team will first look at data from large numbers of people who had already been treated with those compounds for other disorders. Later, researchers may conduct animal studies to validate findings for dementia before planning studies with people.

The research team has already made progress with their plans for drug repurposing research. First, the research team identified a network of about 20 biological pathways linked to abnormal brain metabolism in people with Alzheimer’s disease and related dementias. These abnormalities may precede or influence the brain changes that lead to dementia.

Next, they identified 35 FDA-approved drugs that might be active against the network of 20 pathways. These drugs are used already to treat diseases other than Alzheimer’s and related dementias. Of these 35, the team selected 15 drugs as the best candidates for further analysis.

From this point, the team plans to analyze data collected during routine health care for the effects of a candidate drug on the development of dementia. Data sources include electronic health records from U.S. Medicare and the United Kingdom. The analysis will estimate the incidence of dementia for people treated with the candidate drug and compare it to those receiving another drug for the same disease.

Results from the DREAM study will help guide future research. If a drug appears to reduce the risk or severity of Alzheimer’s and related dementias, researchers could conduct lab tests to determine how the drug works against dementia, and the drugs could eventually be tested with people in clinical trials.

The researchers noted that the DREAM study relies on the accuracy of information in the databases being analyzed. The researchers plan to use multiple methods of rigorous analysis to ensure that the study’s results are as accurate as possible.

This project is funded by the intramural research program of the National Institute on Aging. It relates to NIH’s AD+ADRD Research Implementation Milestone 7.B, “Initiate research programs for translational bioinformatics and network pharmacology to support rational drug repositioning and combination therapy from discovery through clinical development.”