A new investigational drug called NAP (for its chemical name N-adamantyl phthalimidine), which was designed by scientists in NIA’s Drug Design and Development Section, enabled lab mice to recover faster from severe brain injury compared to those that did not receive the drug candidate. An international research team led by the NIA scientists published the findings in ACS Pharmacology and Translational Science. 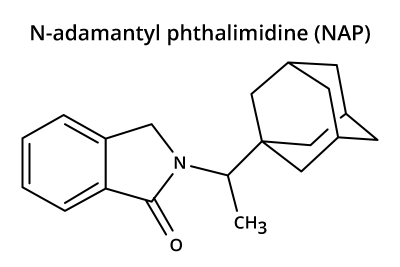 A sudden trauma to the head, such as from a fall or car accident, can damage the brain. Every year, millions of Americans experience a traumatic brain injury, which can cause headaches, memory problems, difficulty sleeping, and depression. In addition, having a traumatic brain injury is a risk factor for later developing other conditions such as Alzheimer’s and Parkinson’s.

Scientists in NIA’s Drug Design and Development Section are looking for drug candidates that can improve brain function and combat age-related brain conditions. As part of their work, the group has designed 15 novel drug candidates that share a similar structure with the FDA-approved drug thalidomide, which has several beneficial effects, including anti-inflammatory properties. Unfortunately, thalidomide was discovered to have toxic effects on developing embryos when it was prescribed to treat morning sickness. Although thalidomide is no longer prescribed for pregnant women, it is now used safely to treat conditions such as leprosy and a type of cancer called multiple myeloma.

For the current study, the team set out to test whether any of the 15 candidates might show activity against inflammation associated with traumatic brain injury. Specifically, NIA scientists wanted to find a drug that would lack thalidomide’s ability to bind to the protein called cereblon. Experts believe that when thalidomide binds to this protein, the gateway opens for the toxic effects on embryo development.

Of the 15 drug candidates, the team selected NAP because results from lab tests showed that NAP most likely does not bind to cereblon. Using cell cultures, the team studied NAP’s effect on inflammation. Excessive and long-term inflammation in the brain has been linked to many brain diseases, which can ultimately lead to the death of neurons. After the team added an inflammation-promoting substance to the cell culture, NAP decreased the inflammatory response of the cells, and it also reduced a biological pathway that leads to neuron death.

After that, the team observed NAP’s effects in lab animals. Again, the team noted that NAP can reduce the inflammatory response. In addition, when injured mice received NAP, the animals had a faster recovery of motor impairment from brain injury than mice not receiving the drug candidate. The mice treated with NAP were able to remove an adhesive sticker from a paw faster than placebo-treated mice, and NAP-treated mice were also nimbler and faster walking across a narrow beam. When the team compared images of brain tissue, NAP-treated mice had less severe signs of brain injury and neuron loss than placebo-treated mice.

The NIA scientists are listed as inventors on U.S. Patent Application No. 15,764,193 for NAP, which has potential for other brain conditions as well. Future studies are planned to assess NAP’s long-term effects, including any potential for harming developing embryos of lab animals. After drug candidates like NAP are shown safe and effective in animal studies, scientists can consider moving on to studies in people.

This research was supported in part by NIA's Intramural Research Program and NIA grant R56AG057028.