It’s no secret that our immune system function declines as we age, which can make older adults more susceptible to a variety of viral and bacterial pathogens including COVID-19. But the role of sex in immune system aging is not well understood. An NIA-supported study took a closer look at how the timing and degree of aging-related changes in the immune system varies among men and women and identified how particular immunity characteristics diverge as we grow older. 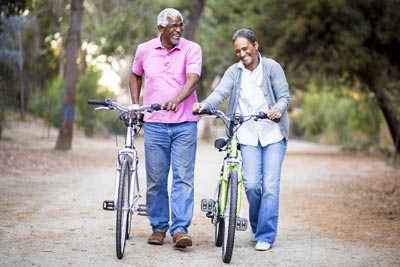 Building upon their previous studies of how aging affects immunity, a team led by scientists at The Jackson Laboratory, Farmington, Connecticut, looked deeper into the underlying molecular and genetic mechanisms behind sex differences in immunity at different stages of life. Their findings were published in the journal Nature Communications.

The team surveyed the blood-based immune cells of 172 healthy adult volunteers (81 men and 91 women) between the ages of 22 and 93, with an eye toward balancing gender, body mass index, frailty scores, and other health attributes to form three age-based groups: young (less than 41 years old), middle-aged (between 41 and 64), and older (over 65.) They also performed genetic analyses to track how the expression of different genes affected immune function over time.

Both sexes experienced alterations in the frequency and activity of different immune cell types with age such as declines in various types of white blood cells, including T cells (named because they mature in the thymus gland), monocytes (formed in the bone marrow), and cytotoxic cells (which kill damaged, infected, or cancerous cells). T-cell loss is particularly important as they are the cells responsible for identifying a foreign pathogen and directing the body’s adaptive immune response to mount a protective immune response. Recent studies have shown that T-cell decline is associated with increased severity of COVID19 infections, especially in older patients.

Another important finding related to the frequency of B cells; a type of white blood cell vital to producing antibodies in response to pathogens. Women showed little age-related changes in B cells, but older men’s B cells showed a major loss in chromatin accessibility, which relates to how DNA strands are wound and organized, indicating a decline in the B-cell function. These changes were persistently more pronounced in men than women in otherwise well-matched study groups.

The team studied shifts in immune system patterns over different life stages and found two distinct periods of rapid genomic change: one occurring in the late 30s to early 40s was found in both sexes, and another that occurred later in life that was found to be different between the sexes. Men usually experienced this phase in their early 60s whereas women underwent these changes later in life in their late 60s to early 70s. Moreover, the degree of change was less in women. This five-year gap corresponds closely to the average lifespan difference between women (81.6 years) and men (76.9 years) in the United States, the researchers noted, and occurred roughly 12 to 15 years before the end of the average lifespan.

Differences in immune system cells between men and women were most apparent after age 65. Older females had more active B and T cells, which are part of the body’s adaptive immune system that acts slower than the immediate response to injury or disease, but then results in the generation of long-term resistance to particular pathogens. Conversely, older men had more activity in the innate immune system — the body’s nonspecific but more rapid-reaction defense force.

These findings regarding how and when immune system changes differ by men and women could be potentially useful to help better customize clinical care based on sex and life stage, the researchers reported. Results could also help inform future research on developing potential treatments to boost immune system function in older individuals. Data from the study are available online at https://immune-aging.jax.org.