A new strategy that targets cell-wide protein malfunction shows promise for Alzheimer’s disease and brain cancers, according to a study published in Nature Communications on Aug. 3. The strategy has been used to create novel biomarkers and therapeutics, with a Phase 2 clinical trial for use in Alzheimer’s disease already underway. 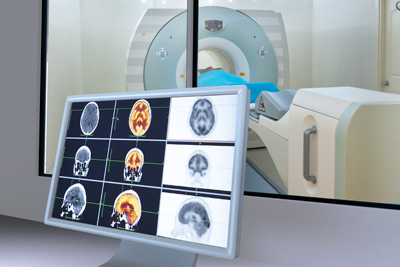 The scientists behind the study are part of an NIA-funded team at the Sloan Kettering Institute that studies how proteins take shape and interact with each other, as well as how this process can go awry in disease. Their research looks at how genetic mutations and environmental stressors can change how a cell behaves. When these changes add up, the proteins in a cell do not interact with each other as they should, leading to disease.

For a cell to be healthy, proteins need to take on the right shape and interact in specific ways. A class of molecules called chaperones helps the proteins form correctly. In diseases like cancer, Parkinson’s, and Alzheimer’s, chaperones stop working normally and become poisonous, causing the proteins in the cell to take on the wrong shape and interact with each other in ways that can cause disease. In cancer, for example, the malfunctioning proteins allow the cell to grow and divide in an uncontrolled way. In Alzheimer’s, the malfunctioning proteins include those that are essential for memory and thinking.

With NIA’s support, the Sloan Kettering scientists developed a small molecule that targets the disease-causing chaperones. This molecule, called PU-AD, could be used as both a biomarker and a therapeutic because it binds specifically with the faulty chaperones. When PU-AD is attached to a tag that can be visualized with a PET scan, it can be used as a biomarker to detect disease. PU-AD could also be used as a drug to bind and neutralize the poisonous chaperone molecules. In the study, the scientists found that PU-AD targets diseased cells but not healthy ones — an important step toward using it as both a biomarker and a therapeutic.

Scientists have already completed a Phase 1 clinical trial showing that PU-AD is safe in healthy volunteers. A Phase 2 trial, on track to be completed by the end of 2022, is currently testing if the drug is effective in people with mild Alzheimer’s. Later this year, the researchers will also begin testing the safety of the drug for treating aggressive brain cancers.

These activities relate to NIH’s AD+ADRD Research Implementation Milestone 6.E, “Initiate first in human, Phase I drug trials for therapeutic agents against at least six novel therapeutic targets. These trials will provide evidence of safety and target engagement,” and AD+ADRD Research Implementation Milestone 9.B, “Accelerate the development of the next generation CNS imaging ligands and biofluid molecular signatures targeting a variety of disease processes (neuroinflammation, bioenergetic/metabolic compromise, oxidative stress, synaptic pathology) that can be used as research tools or developed into diagnostic, prognostic, theragnostic or target engagement biomarkers.”