A newly created mouse model has expanded the ability to study senescent cells, which are cells that in essence have stopped dividing but are still active and play an important role in aging. A team led by University of Connecticut researchers reported the new mouse model in Nature Aging. A review article accompanying the NIA-supported study emphasizes the importance of the new model to the aging biology research community. Other scientists can use the new animal model to advance research on senescent cells and test drug candidates. 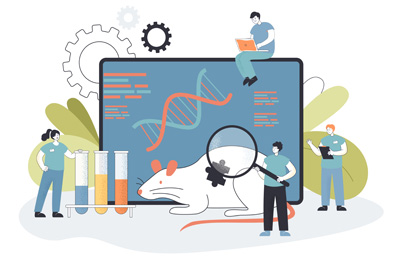 Over time, senescent cells can build up in the body. The accumulation of senescent cells has been linked to many diseases of aging, such as diabetes, heart disease, and dementia.

The team inserted genetic instructions that direct the mice to emit light in cells with p21, enabling these cells to be monitored in experiments. The higher the level of p21, the brighter the glow. The team tested and confirmed that the light-producing cells with increased p21 were senescent. In addition, the team also confirmed that stressful conditions, such as a high-fat diet, could cause cells to produce higher levels of p21 to collect in certain tissues in the mice. Further validation of the model was achieved by showing that selective clearance of p21 cells reversed age-related physical frailty in the mice.