Levels of a nerve cell protein called neurofilament light chain (NfL) more accurately predict remaining lifespan in late life than currently used estimates based on physical and cognitive function, according to a study supported in part by NIA. The findings, which appeared Feb. 11 in Nature Aging, suggest that degeneration of the nervous system contributes to mortality late in life. The study was led by investigators at Stanford University; the University of Tübingen, Germany; and Odense University Hospital, Denmark. 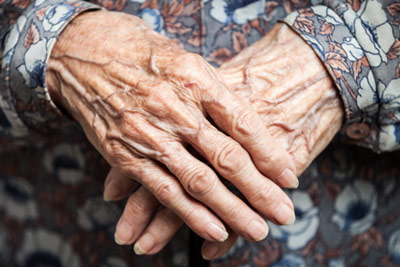 NfL is a structural protein that helps give nerve cells shape and stability. Normally, NfL resides within cells, but when cells are damaged, the protein is released and can find its way into the cerebrospinal fluid (CSF) and bloodstream. Previous research has shown that NfL levels rise in CSF and blood with increasing age and in response to brain damage and certain neurological disorders, such as Alzheimer’s disease and multiple sclerosis. As a result, NfL increasingly is being used as a biomarker for neurological illness and injury.

For this new study, the researchers set out to test if there is a link between nervous system degeneration, as measured by blood NfL levels, and mortality in older individuals. While aging is a complex biological process, a role for the nervous system in determining longevity has been suggested by other studies. Identifying molecular predictors of lifespan could lead to improved diagnostics, disease prevention strategies, and health care approaches that could extend life.

The team began by measuring NfL in blood samples from 122 people of diverse ages, ranging from 21 to 107 years old, with the results confirming the previously reported observation that blood NfL levels climb with increasing age. They also noted a parallel rise in levels of other proteins involved in neuronal function, providing added evidence for nervous system deterioration as people grow older.

The researchers next analyzed health data of 180 people in their 90s and 135 people 100 and older from Denmark. The data included NfL measurements from blood samples and assessments of physical and cognitive abilities obtained a few years ago. They also scanned Danish registry records up until January 2019 for the subjects’ death dates. Their analysis revealed that higher NfL levels track with shorter survival times. Moreover, the NfL values outperformed other measures commonly used to estimate remaining lifespan that rely on multi-item assessments of a person’s physical and cognitive abilities.

Additional experiments in mice showed that dietary restriction, which is known to extend lifespan in many species, including mice, decreases the age-related rise in NfL blood levels. The researchers measured about 50% less NfL in blood samples from the longer-lived mice fed a restricted diet at 16 and 20 months of age, compared to age-matched controls given a normal diet. These findings provide additional evidence for a correlation between blood NfL levels and mortality.

These efforts have uncovered a blood biomarker that may be a more accurate predictor of mortality in late life than physical and mental fitness evaluations, which can be time consuming and difficult to perform in some of the oldest individuals. The findings also support a role for nervous system dysfunction in old-age mortality. Additional studies are needed to test how the NfL biomarker compares with multi-component measures of biomarkers for aging and mortality risk.

This research was supported in part by NIA grant DP1AG053015.

These activities relate to NIH’s AD+ADRD Research Implementation Milestone 9.A, “Develop and validate translatable biomarkers for their use in preclinical and clinical drug development,” 9.G, “Initiate studies to link peripheral blood-based molecular signatures and central imaging and CSF biomarkers,” and 9.M, “Develop diagnostics/biomarkers in asymptomatic individuals.”