NIA Director Dr. Richard J. Hodes joined health ministers, leading scientists, and advocates from around the world March 16-17 in Geneva, Switzerland, to advance dementia research planning on a global scale. The Ministerial Conference on Global Action Against Dementia, hosted by the World Health Organization (WHO), reflected shared goals that are gaining momentum worldwide: to raise awareness of dementia’s socioeconomic impact, advance scientific research, foster the availability of new treatments and improved care, and consider the state of the science with respect to risk reduction for neurodegenerative disorders.

Several countries, including the United States, have developed national plans to address Alzheimer’s disease and other dementias, focusing on research, clinical care, and long-term services and supports. “We have been running behind the curve with dementia for a long time,” said WHO Director-General Dr. Margaret Chan, “but several recent events tell us that we are catching up. We must weave these multiple new initiatives into a comprehensive plan that can work in all countries.”

Dr. Hodes participated on a panel about dementia research strategy at the 2-day WHO meeting. Other discussions covered innovations in dementia treatment, risk reduction, and national policy. Participants also heard from people living with dementia about their concerns and ways to strengthen health care and social systems for them.

The WHO conference was the latest of several international meetings held during the last few years to share information and discuss anti-dementia strategies and possible collaborations. The overarching goals of the global efforts are to identify a cure or disease-modifying therapy for dementia by 2025, a primary goal of the U.S. National Plan to Address Alzheimer’s Disease; recognize the public health burden of dementia worldwide; and provide care and resources for people with dementia. NIH leads the research goals of the U.S. plan.

A major challenge for the G7 is prioritizing research to tackle a growing dementia burden with limited resources. There are currently 47.5 million people with dementia worldwide, a number expected to nearly triple by 2050, estimates Dr. Martin Prince of King’s College London.

Total G7 dementia research and development spending was nearly $800 million in 2012, according to Dirk Pilat of the Organization for Economic Cooperation and Development. The United States is the largest funder of dementia research among the G7 countries.

In some G7 countries, government, academia, and industry have formed partnerships to help support dementia research. Efforts by the United States, WHO, and other organizations to track and coordinate dementia research and spending internationally also are gaining traction. These efforts will help identify research gaps and allow better data sharing, participants at the February 11 meeting said.

One successful effort is the International Alzheimer's and Related Dementias Research Portfolio (IADRP), a searchable database created by NIA and the Alzheimer’s Association that so far includes details of 6,000 dementia research projects from public- and private-sector organizations in eight countries. “Individual investigators, nations, funders, and organizations such as [WHO] can use this to catalog what’s going on globally and look for opportunities for collaboration and coordination,” Dr. Hodes said in Geneva.

Other global dementia concerns include harmonizing regulatory pathways to speed drug development, attending to the needs of low-income countries, and ensuring that global efforts to address dementia continue despite changes in leadership.

At the outcome of the WHO Conference, participants, including 80 member states, 80 philanthropic foundations, 45 nongovernmental organizations, and four United Nations agencies, called for action to strengthen global efforts against dementia.

“There is a tidal wave of dementia coming our way worldwide.” said Dr. Chan. “We need to see greater investments in research to develop a cure, but also to improve the quality of life of people living with dementia and the support given to their caregivers.” 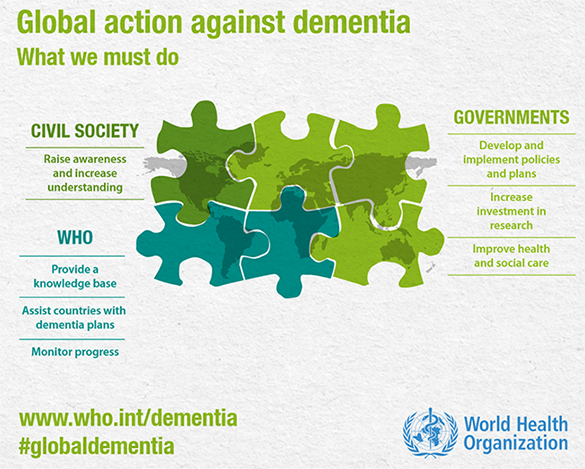