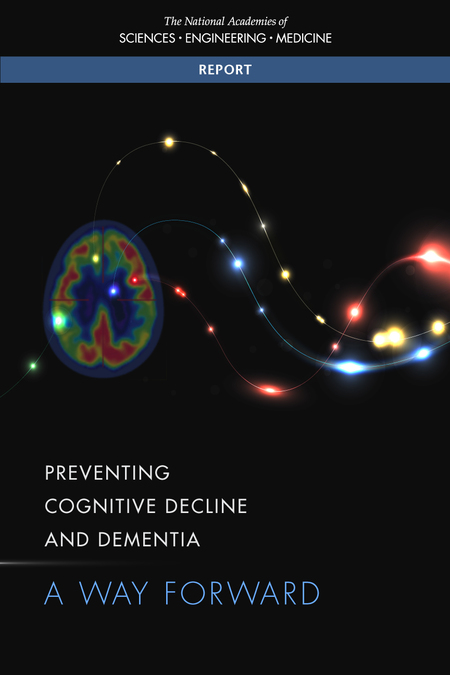 The public is enormously concerned about dementia and cognitive impairment, and a wide range of programs and products, such as diets, exercise regimens, games, and supplements, purport to keep these conditions at bay. It is difficult for individuals, health care providers and policy makers to ascertain what has been demonstrated to prevent or reduce risk. To help sort through the data and to understand the quality and weight of current evidence for possible interventions, the National Institute on Aging (NIA) at the National Institutes of Health, commissioned experts for an extensive scientific review and to provide recommendations for public health messaging and future research priorities. In response to that request, a National Academies of Sciences, Engineering and Medicine (NASEM) committee has concluded that current evidence does not support a mass public education campaign to encourage people to adopt specific interventions to prevent cognitive decline or dementia.

Importantly, the committee also cited "encouraging although inconclusive" evidence for three specific types of interventions—cognitive training, blood pressure control for people with hypertension, and increased physical activity. Based on that evidence, the committee recommended providing the public with accurate information about their potential positive impacts for some conditions while more definitive research on these and other approaches moves forward. The committee suggested that health care providers might include mention of the potential cognitive benefits of these interventions when promoting their adoption for the prevention or control of other diseases and conditions.

The full NASEM report, "Preventing Cognitive Decline and Dementia: A Way Forward," can be viewed online.

The committee's recommendations are based in large part on an NIA-requested and supported systematic evidence review by the Agency for Healthcare Research and Quality's (AHRQ) Evidence-based Practice Center (EPC). The Minnesota EPC categorized hundreds of studies by strength and quality for the AHRQ part of the project.

"We're all urgently seeking ways to prevent dementia and cognitive decline with age," said NIA Director Richard J. Hodes, M.D. "But we must consider the strength of evidence -- or lack thereof -- in making decisions about personal and public investments in prevention. I am grateful for the National Academies' and AHRQ's careful reviews, which recognize the progress research has made in beginning to answer such questions, while pointing the way for additional studies. This report will be very instructive for what we can tell the public now, as critical research continues."

The committee noted potential effects, as well as limitations of the evidence, for:

In communicating with the public, the committee said, the NIH, the Centers for Disease Control and Prevention and other organizations should present potential benefits of the three interventions as they apply to cognitive decline, MCI, and Alzheimer's dementia, while pointing out the limitations of the evidence. There are considerable challenges in presenting such nuanced messages, it added, as the public likely will not draw fine distinctions among the three conditions or about levels of evidence.

The committee expressed optimism for the future of research to provide answers that the public and providers are seeking. Substantial knowledge has been gained since the last comprehensive evidence review in 2010, and this complex and exciting area of discovery will continue to grow with investments in research. In addition to encouraging ongoing research in the three areas for which it found evidence most developed, the committee recommended as priority areas for further study: new anti-dementia treatments; treatments for diabetes and depression; dietary interventions; lipid-lowering treatments; sleep quality interventions; social engagement, and vitamin B12 plus folic acid supplementation.

For its evidence review, the AHRQ's EPC examined the scientific literature on 13 classes of interventions associated with preventing, slowing, or delaying the onset of clinical Alzheimer's-type dementia and MCI. The AHRQ report, issued in March 2017, found that most approaches showed no evidence of benefit to delay or prevent age-related cognitive decline, MCI, or Alzheimer's dementia. It concluded that, at present, there is not sufficient strength of evidence to justify large-scale investing in public health activities aimed at preventing dementia; some results may be viewed as potential added benefits to already identified public health interventions.

The full EPC review, with a full breakdown of findings for various approaches, is online.

UPDATED 12/20: The Annals of Internal Medicine published Dec. 19, 2017, four evidence-based reviews that served as the basis for the recommendations in the National Academies of Science, Engineering and Medicine (NASEM) report. The reviews were completed by the Agency for Healthcare Research and Quality's (AHRQ's) Minnesota Evidence-based Practice Center at the request and support of the NIA for the public-messaging considerations of the NASEM Committee.

To read the review papers, click on the titles below:

To read two related editorials on recent evidence assessments in cognitive decline, impairment and Alzheimer's prevention, click the links below:

Modifiable Risk Factors and Prevention of Dementia: What Is the Latest Evidence?

About the National Institute on Aging: The NIA leads the federal government effort conducting and supporting research on aging and the health and well-being of older people. It provides information on age-related cognitive change and neurodegenerative disease specifically at its Alzheimer's Disease Education and Referral (ADEAR) Center. For additional information about cognitive health and older adults, go to NIA’s cognitive aging portal.