Use of mRNA vaccinations, such as the Pfizer-BioNTech and Moderna vaccines, in nursing home populations was found to decrease the number of new cases of SARS-CoV-2 infection (the virus that causes the COVID-19 disease) in both vaccinated and unvaccinated residents. The findings were published as a correspondence in the New England Journal of Medicine. 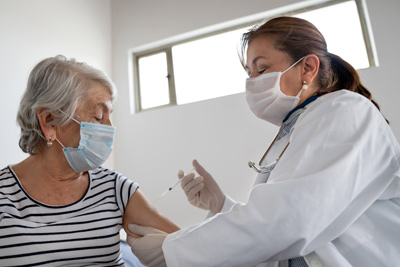 Researchers from Brown University School of Public Health, Genesis HealthCare, and Warren Alpert Medical School of Brown University used electronic health record data from 280 nursing homes across 21 states. They measured the number of residents who newly tested positive for SARS-CoV-2 between Feb. 15 and March 31 across three groups — those who had received at least one vaccine dose (18,242 residents), those who received both doses (13,048 residents), and those who had not received any vaccine (3,990 residents).

These findings demonstrate the real-world ability of the mRNA vaccines in a nursing home population, a high-risk group, to decrease new infections. Further examination may clarify the impact of nursing home staff member vaccination rates on residents. Though the number of new cases decreased with vaccinations, the presence of any new cases highlights the need for continued vaccination efforts and other precautionary measures.