Restoring protein production in the brain could help treat Alzheimer’s disease, according to a recent study using mouse models. In the study, researchers showed that a substance that jump-starts protein synthesis helped mice with cognitive problems do better on memory-associated behavior tests. The study was led by researchers at the Federal University of Rio de Janeiro and New York University and was published in Science Signaling on Feb. 2. 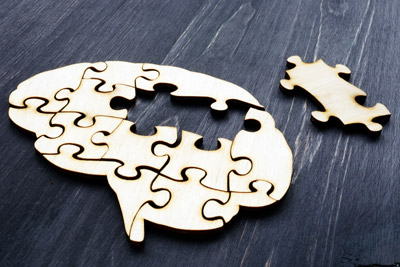 Studies from multiple research groups suggest that the mechanism that controls the addition of a phosphate onto eIF2 goes awry in Alzheimer’s and other diseases. In this recent study, funded in part by NIA, researchers found that compared with controls, brain tissue from deceased people who had Alzheimer’s disease had higher levels of phosphate-modified eIF2, which reduces protein production. The researchers tested whether a substance called ISRIB (integrated stress response inhibitor), which is known to restore protein production after cellular stress, would increase protein production and help improve memory in mice that had symptoms similar to Alzheimer’s disease.

The researchers tested the effectiveness of ISRIB in three mouse models of Alzheimer’s disease: mice that were injected with a molecule that impairs long-term memory, mice that were given beta-amyloid oligomers (memory-impairing protein toxins that build up in the brains of people with Alzheimer’s disease), and mice that were genetically engineered to have hallmarks of Alzheimer’s disease. The researchers tested the memory of these mice by using behavior tests. In all three models, mice that received daily ISRIB injections over several days performed better on the memory tests and had higher levels of protein production in the brain than they had prior to the injections. A control group of mice had no noticeable effects from the treatment, suggesting that ISRIB could repair protein production when needed but not have an effect when conditions in the brain are normal.

The researchers note that two previous studies suggested that ISRIB had no benefits against the symptoms of Alzheimer’s in mouse models. However, the prior studies used a single, high dose of the drug. The new study used lower doses of ISRIB daily for several days, which might have helped improve its effectiveness. Future studies to explore the details of how ISRIB works to improve memory could help researchers develop drugs that restore protein synthesis in the brain as effective treatment options for Alzheimer’s disease.