Using a new mini-brain model, a large team of researchers were able to demonstrate the damaging changes that occur in brain cells of people with frontotemporal dementia (FTD). Published in Cell on Aug. 19, the findings show a clear sequence of damaging events that eventually lead to cell death and provide potential pathways to develop and test treatments for this disease. 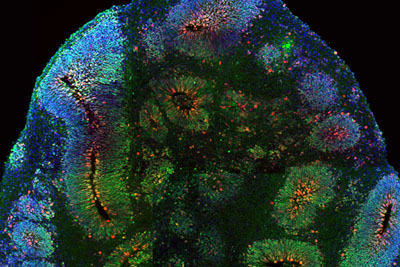 FTD is a form of dementia that can cause behavioral changes, trouble with communication, and movement problems. These symptoms result from brain cells, or neurons, dying in certain parts of the brain. Some FTD cases result from inheriting a mutated version of the MAPT gene, which causes abnormalities in a protein called tau.

To study how this mutation causes neurons to die, researchers created a new model that allows them to see the progression of events that leads to cell death. The study is the result of a large collaboration among researchers from the Icahn School of Medicine at Mount Sinai, Massachusetts General Hospital, Harvard Medical School, the Neural Stem Cell Institute, University of Southern California, Amgen Research, and Washington University in St. Louis.

In the study, researchers took advantage of technology that allows skin cells to turn back into stem cells. Humans begin fetal development as one cell, which divides to become a handful of cells, and eventually becomes the whole body. These early cells, called stem cells, are able to become any type of cell in the body. Starting with skin cells donated by people who carry a MAPT gene mutation that causes FTD, the scientists turned back the developmental clock and reverted those skin cells into stem cells. Then the researchers grew these stem cells into neurons and assembled those neurons into mini-brain models, looking for symptoms of cellular disease along the way.

By studying these FTD mini-brain models, the scientists discovered a sequence of events that goes wrong in neurons and eventually causes them to die. The neurons in the FTD mini-brain models were already showing signs of stress two months after development. At four months, researchers observed that tau protein was building up in the neurons and that the waste management systems that would normally help clear the build-up had started to fail.

In addition, the scientists discovered that the neurons had harmful changes in splicing – a process by which the cell chooses which parts of a gene will be included in the protein it encodes. The faulty splicing was caused by an increase in the amount of a protein called ELAVL4, which regulates splicing of genes involved in communication between neurons. The splicing changes eventually caused the neurons to have too many glutamate receptors – proteins that allow the neuron to hear an incoming chemical message. At six months, there were so many receptors that just getting messages from other neurons was overwhelming and toxic. Finally, the researchers tested a drug called apilimod that reduces the number of receptors present at connections between neurons and found that this could stop neurons from dying in the FTD mini-brain models.

The researchers noted some limitations; namely, that the mini-brain models do not have the helper cells, called glia, that are present in actual brains and provide support for neurons to function and communicate. In the future, they would like to explore how the helper cells affect the progression of disease in the neurons. Overall, the study provides critical insights into the events that cause neurons to die in people with genetically inherited FTD. These insights will help scientists to develop and test new therapeutics for the disease.