Middle-aged adults who develop functional impairments—difficulty performing activities of daily living (ADLs) such as bathing and dressing—are at higher risk for hospitalization and nursing home admission than unimpaired adults the same age, according to an NIA-supported study. The findings, published online in JAMA Internal Medicine, raise questions about how clinicians can help those in midlife prevent or delay struggles with daily activities that affect health and quality of life. 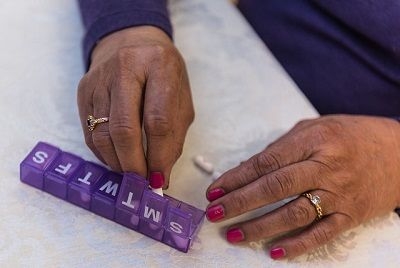 Researchers at the University of Pennsylvania and the University of California, San Francisco, wanted to find out how middle-aged adults became functionally impaired and if their impairments posed the same risks as in older adults. Nearly 15 percent of adults age 55 to 64 are functionally impaired, meaning they have difficulty performing one or more of six basic ADLs: bathing, dressing, transferring (such as from a bed to a chair), toileting, eating, and walking across a room.

The researchers analyzed health data for 5,540 adults age 50 to 56 from the nationally representative Health and Retirement Study (HRS). None was functionally impaired when they entered the HRS in 1992, 1998, or 2004, but 1,097 of them (19.8 percent) reported that they developed an impairment in at least one ADL by age 64. Examining data reported every 2 years through 2014, the researchers found that functionally impaired participants had a significantly higher risk of hospitalization and nursing home admission than participants their age without functional impairment. The risk of death in the two groups was about the same after adjusting for factors such as health status and health behaviors like smoking.

The study found similar risks for hospitalization and nursing home admission, as well as for death, in the 857 HRS participants (15.5 percent) who developed trouble performing at least one instrumental ADL. These activities include managing money, managing medications, shopping for groceries, preparing meals, and making telephone calls.

The authors noted that not all functional impairments are permanent; sometimes they are temporary or disappear and then recur. Participants with functional impairments were more likely to be women, racial or ethnic minorities, unmarried, and to have lower socioeconomic status. They also had poorer health status and were more likely to smoke, exercise infrequently, and lack health insurance.